Cinnamon: your guide to the spice of life 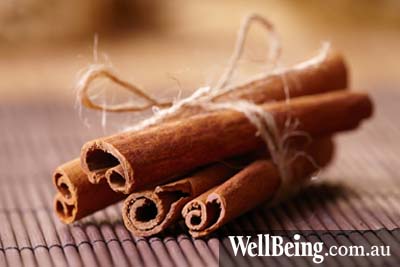 Cinnamon (Cinnamomum verum or Cinnamomum cassia) seems to go with all things sweet. It is sprinkled on toast, often as “cinnamon sugar”, added to pastries and used in sweet pies and cakes. There may be some poetry in this because, as we shall see, cinnamon actually does reduce blood sugar, but that is probably not the motivation behind bakers’ use of it.

The simple fact is that cinnamon tastes wonderful. This delicious spice, however, also has medicinal qualities that have been recognised for centuries.

From China to Rome

Cinnamon is a tree that is native to Sri Lanka and India. It grows in tropical forests and is now extensively cultivated throughout the world, especially in the West Indies and the Philippines. The cinnamon tree is grown from cuttings and every second year the young trees are cut back to just above ground level. The bark is harvested from the young branches that sprout before they reach three years of age, and left to ferment for a day. After that day, the outer bark is removed and the inner bark is what we know as “cinnamon”.

Chinese herbals from as early as 2700 BCE mention cinnamon as being useful for treating fever, diarrhoea and menstrual problems. The Ayurvedic physicians of India used it in similar ways. It was also written about as a medicinal herb in the Jewish religious text the Torah.

By around 500 BCE, cinnamon had made its way to Egypt and parts of Europe. The Egyptians used it as part of their embalming mixtures and the Romans used it as a spice, perfume and treatment for indigestion. In the 12th century, the German Abbess Hildegard of Bingen was still recommending it for sinus problems, but by the 17th century it had become primarily a culinary herb. The 19th century, however, saw a resurgence of interest in the medicinal properties of cinnamon among the Eclectic physicians of America. That interest continues today and is substantiated by a wealth of research.

Both species of cinnamon contain an essential oil made primarily of a substance called cinnamaldehyde. It’s this cinnamaldehyde that is responsible for many of the actions attributed to cinnamon. It is, for instance, carminative, meaning it will relax smooth muscle in the digestive tract. It’s other, water-soluble, compounds from cinnamon, however, that improve insulin activity and have blood-sugar-lowering actions.

Digestion
Cinnamon bark is used in the treatment of many digestive conditions, including loss of appetite, feelings of fullness, flatulence and diarrhoea. The antispasmodic (carminative) effects are behind many of these benefits.

Diabetes
There is conflicting research on cinnamon use in diabetes, but it does seem likely that it’s beneficial for balancing blood sugars. In a study published in the Journal of Clinical Nutrition 2009, it was found that 3g of cinnamon led to reduced post-meal insulin levels. A 2003 study in the journal Diabetes Care showed that cinnamon lowered both blood glucose and blood fat levels in type 2 diabetic patients.

Antimicrobial
Cinnamon, like so many other spices, has been used to preserve food for centuries. It can do this because it has antimicrobial, fungicidal and antioxidant properties. This antimicrobial action, as well as the pleasantness of its taste, is why cinnamon has been used in many toothpastes. It has also been shown that cinnamon can act against the cause of many infections, the intestinal bug E. coli, as well as being active against Candida albicans.

“Warming”
In both the Ayurvedic tradition and in European herbal medicine, cinnamon has a reputation as a warming remedy that can be used to treat “cold” conditions, often in conjunction with the equally warming remedy, ginger. Cinnamon is believed to stimulate circulation and is therefore good for those with poor circulation to the fingers and toes. Its warming nature also makes it good for aching muscles, “weak” digestions and during convalescence.

For a delicious, warming tea, use half to three-quarters of a teaspoon of cinnamon powder per cup and leave it to stand for 10–20 minutes. Drink three cups a day for medicinal effects.

If you just want to use the dried bark, you need 2–4g taken four times a day.

If you are using a herbal extract of cinnamon at a concentration of 1:1, you need 0.5-1mL three times a day.

You should be careful of the essential oil and not take it internally as it can be toxic. You should also be careful applying the essential oil to your skin as some people can have an allergic reaction. The powdered bark, however, is well tolerated. If you are pregnant, you should avoid using cinnamon medicinally but usual dietary intakes should not cause a problem. Children under two should also avoid cinnamon.