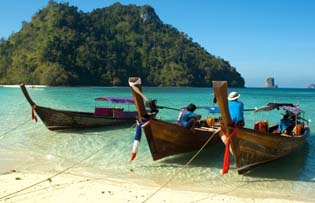 The monks donâ€™t notice us as we sit on cushioned pool lounges to do our meditation. Their golden robes glow as the sun rises over the Gulf of Thailand. A few dogs bark as they rumble further down what is a pretty ugly beach, dotted with stalls selling soft drinks and sticky rice and, later in the day, cheap massage stalls with locals missing teeth who juggle kids, dogs and massage oil as they urge you to relax with them. Yet the three monks are having none of it â€” they simply stroll along Hua Hin Beach slowly, accepting offerings from locals who believe helping them will bring earthly and spiritual rewards.

On a more temporal level, Australian naturopath Keri Krieger is in heaven. The acupuncture expert based on the Gold Coast and working from Gwinganna Lifestyle Retreat is in the grip of peaceful thought alongside me as meditation expert Danchai Chernprateep works his magic. Danchai tells us to become aware of â€œour human pollutionâ€ and to acknowledge that â€œtrue nourishment comes from withinâ€. He urges us to train our minds with compassion and to â€œspiral out the dark energy of negative thoughts and stiffness in the neckâ€. Next he leads us to breathe in white light and, as we exhale, breathe out grudges, negative thoughts and fear.

Maybe itâ€™s the five days away from my family, maybe itâ€™s the belting Thai sun (even at 7am), maybe itâ€™s the presence of the monks, but Danchaiâ€™s meditation class is powerful. For the final 20 minutes of the session I sob and, as the tears flow, I have no idea what I am crying about. Itâ€™s only on my return to Australia that I feel a sense of freedom and realise I have set aside deep resentments for the years of exhaustion involved in raising three children under five with a husband working night shift. The breathing techniques led by Danchai leave me feeling free.

Iâ€™m joined at Chiva-Som by Kerri and her colleague Craig Howorth who are here as part of an international exchange of ideas, supported by both spas. The aim is to share expertise and improve both retreats while offering guests something a little different from another land. A team of Chiva-Som therapists has since visited Gwinganna and shared their expertise with guests.

Craig Howorthâ€™s treatment brings the sound of kookaburras to the Thai resort as his unique form of music massage combines different massage techniques with a soaring and swooping music track he recorded on the Gold Coast. His specialist treatment is called Sound and Stone which he says â€œemploys sound and its careful organisation into music, during meditation and bodyworkâ€.

This was created through what he calls â€œan evolutionary processâ€. Previously he had worked in hospitality in five-star hotels, mainly as a concierge while working as a disc jockey at night to satisfy his interest in music. A few years ago he joined Gwinganna Health Retreat, owned by a consortium that includes Deborra-Lee Furness, Hugh Jackman and Tony de Leede. Gwinganna supported Craig by funding a purpose-built, soundproof room and a massage table wired to the audio system. Craig wears rubber-soled, neoprene slippers during the treatment so the only sound clients hear is the music. The treatment, Craig says, â€œCan be very freeing. People often say the experience makes them feel lifted on a cushion of sound.â€

For Keri, Chiva-Som offered her first taste of Thai life and big lessons in the power of meditation. â€œTo be honest, before this experience I understood technically how meditation was good for you but never from a personal point of view,â€ she says. â€œI have Danchai and Chiva-Som to thank for my new-found practice and resulting clarity. Danchai asks us to absorb the light and I am suddenly clear, a smile wraps itself around my face spontaneously. That meditation leaves me feeling loved, my shoulders relaxed and my breathing is easy.â€

Keriâ€™s specialist treatment that she is bringing to Chiva-Som is called â€œrockupunctureâ€ and itâ€™s a combination of traditional acupuncture and hot stone massage. The needles are applied to the skin and pushed flat. A towel is placed over the top and hot stones applied. While these do their work, Keri massages the lower body using hot stones. â€œItâ€™s such a lush treatment and together the two therapies help you get the most from each,â€ Keri explains. â€œI like to work actively on the legs and feet with the hot stones then once I take the points out, I work actively on the back. The result can be a deeply relaxing experience.â€

A stay at Chiva-Som, a three-hour drive south of Bangkok, begins with a health and wellness consultation where you are weighed, set goals and choose the treatments for your stay. It can be a confusing half hour as the resort offers so many treatments. One of the most popular is a deep stomach massage called Chi Nei Tsang which is an internal organ massage mostly over the navel. It is meant to help unblock energy that is draining the organs and can help people release negative emotions. Another popular treatment is cranio-sacral therapy in which the head and face are massaged with the aim of improving the flow of cerebro-spinal fluid. Itâ€™s a favourite of in-house naturopath William Engelbert who says it can be useful for anyone who gets migraines, chronic neck and back pain, stress or anxiety.

At the cooking school guests get the chance to pick up some ideas from the chef, watched by a naturopath who explains the nutritional benefits of what is being created and thereâ€™s also a cookbook. The essence of the dining experience is that there is no oil used in any of the cooking. Instead, they use vegetable stock and a lot of steaming.

Each evening, three juicy limes are left in the room for you to cut first thing the next morning and add to water â€“ it is said to kick-start the digestive system. The resort urges guests not to drink alcohol with meals, saying there is nothing to be gained by diluting stomach acids.

At breakfast and lunch, the buffet includes Ayurvedic powders to add to cereal and soups, as well as linseed, sunflower and almond meal or LSA, dried fruits and nuts. â€œI am strong believer in the power of starting each meal with fiery or bitter foods that stimulate digestion and get the liver activated,â€ Engelbert says. â€œChilli, ginger, cinnamon, cardamom, radicchio, thyme, rosemary, basil, rocket, dandelion leaf are all good. Sour also stimulates digestion.â€ William says he has seen people lose as much as 20 kilos over two weeks but doesnâ€™t recommend such a drastic weight loss, saying a reduction of one to two kilos a week is sensible.