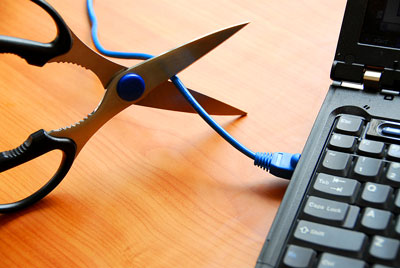 The big turn-off- Technology was initially created to make our lives easier but, as most of us have discovered, just the opposite is true. So what benefits can be gained by switching off, tuning out and dropping offline?
By Kate Hennessy

During the Industrial Revolution workers, who were staring into the iron maw of machinery that did not fatigue, fought for an eight-hour day. This desire was underpinned by the belief that quality of life was best maintained by eight hours of labour, eight hours of rest and eight hours of recreation. Now, though, the Information Revolution is infiltrating all three.

The internet and its glossy harem of mobile devices give us access to information and entertainment any time, any place. They have delivered a knockout blow to previous ways of life. Those of us cynical of technology’s benefits are considered old-fashioned or, worse, “out of the loop”. But constant connectivity is shadowed by health and wellbeing concerns. These include stress, disturbed sleep, less dedicated family time, plummeting concentration skills, weight problems, eroded holidays and burnout.

Still, we can’t get enough. Demand for iPhones grew by 230 per cent in Australia last year and globally children spend more time online than ever. Spinning like tops in the middle of all this convenience and connectivity — are we happier?

Susan Maushart decided to find out. On January 4, 2009, the Perth-based journalist, iPhone addict and mother of three disconnected the family home for six months. Bill, 15, was an avid online gamer; Anni, 18, could spend 35 hours a week on social networks, games and her mobile phone. Sussy, 14, claimed she could not sleep without her laptop or take walks without her iPod.

“We were so focused on what our screens were delivering, we ignored the dynamics before our eyes,” says Maushart. “We were ignoring the relationships there in real life.”

Bravely, Maushart removed all screen-based distractions: internet, TV, mobile phones (mostly) and computers. She charted the experiment in her book The Winter of Our Disconnect. During their half-year digital detox, the family was transformed from a group of related individuals glued to their screens to a genuine family that talked, ate, played games and shopped together.

“We got closer than we’ve ever been. The kids hung out in each other’s bedrooms and on a Saturday we lay around reading the paper. Food became a huge thing, which was very bonding. We also spent more time with our pets.”

Trips to the movies spiked, says Maushart, but they relished the films like never before. “We arrived with every pore open to watch because we weren’t filled to the brim with information. It was like a meal when you haven’t snacked in between — it’s so much more satisfying.

“The wireless internet aspect has really changed things for families. A dial-up or Ethernet connection is rooted to a designated place, but having your house wirelessly connected so you can roam freely brings the mountain to Mohammed, in a sense. The boundaries are gone.” Maushart’s family is now juggling reality back on the grid, alongside the 80 per cent of Australians who are internet users.

It’s strange to think that in 1995 we communicated via handwritten letters. Fifteen years later, receiving a letter elicits a mix of surprise, nostalgia and awe that someone could be bothered. By 2011, 3.2 billion people will be sending 35 trillion emails each year. That’s an awful lot of email-checking, something New York-based author John Freeman learnt the hard way.

Freeman had been a book critic for 10 years when his ability to concentrate began to deteriorate. As his emails reached nearly 300 each day and he started having difficulty reading books, Freeman realised his waking hours were dominated by email. He no longer had the time or peace of mind to read.