Is there power in protest? 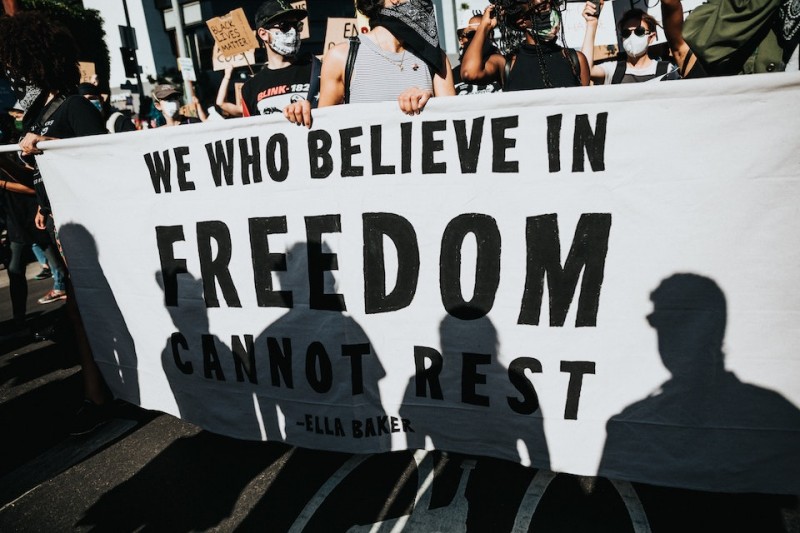 
From pro-democracy demonstrations in Hong Kong to climate strikes to Black Lives Matter, mass protests are on the rise globally, but in an increasingly digital world have marches lost their power?

We are taking to the streets at an unprecedented level of frequency. Explosions of mass outrage have been growing more common since the mid-1940s, increasing by 11.5 per cent each year for the past decade. In 2019 alone, a tsunami of protests reached every continent and across 114 countries, from Hong Kong to Bolivia, marking an unparalleled amount of political mobilisation.

Protest is vital for democracy. It gives the voiceless a means to shout in the streets, centring ordinary people in democratic life. In an era of instant feedback, protest offers an immediate form of action unshackled from election cycles, and as voting and lobbying are seen as less and less reliable, the masses are seeking change from outside the system’s walls.

But is this new era of global unrest achieving political change, or have boots on the street become nothing more than a piece of theatre?

It’s January 21st 2017; all across the world millions of women sporting pink knitted hats and humorous signs assemble for the Women’s March. Seven hundred cities are ringing with the chants of those calling for female empowerment and against the newly inaugurated President, Donald Trump.

That Saturday in January was the largest single-day demonstration in the history of the United States, but then, of course, the start of the week arrived and the new administration got to work as planned. The point is, while protests are on the rise, they’re also becoming much, much likelier to fail.

The point is, while protests are on the rise, they’re also becoming much, much likelier to fail.

Since the mid-2000s, the success rate of global protests has plummeted to 30 per cent, according to a study by Erica Chenoweth, a Harvard University political scientist, who cites the increasing trend towards authoritarian governments and their use of “sophisticated techniques to undermine and thwart non-violent activists” as central to the decreasing success rate.

Capitalising on the technology that was unavailable to earlier generations, today’s protests unfurl via a digital playbook. It often begins with a viral video that captures an injustice: a knee on the neck, a police officer’s excessive show of force, a foul and inappropriate sound bite. Hashtags are created, spreading like wildfire across social media, and demonstrations are hastily arranged online.

This sort of spread-the-message power was initially heralded as the mobiliser’s trump card; once-unthinkable numbers could now be conjured with a single email. But easy as it is to get boots on the street, the protests of today lack the committed marchers of the pre-Twitter era.

Making space in the ring for once-scoffed at or seemingly extreme ideas goes to the heart of what it means to protest.

Activists used to spend years mobilising through community outreach. Leaders of the civil rights movement knew the critical value of demonstrations for building resolve and visibility, but they also knew the limits to a solidarity-only approach. The movement was successful owing to its dogged organising and strategic planning. Leaders ran training schools for activists, teaching members how to ignore provocations to violence and rattle opponents in front of the cameras; they met daily to drill and hash out disagreements. That effort made the movement less likely to crumble in the face of opposition and gave them the know-how to turn success on the streets into real policy change.

Today’s activists are conjured with ease, yes, but without the dedication of their predecessors. You don’t have to go to training camp to be an activist, you simply have to show up and then go home. It’s minimal-commitment activism. Low threshold entry makes it difficult to maintain a clear and focused message and infighting can easily emerge. Agitators can infiltrate and counterprotests often see demonstrations turn violent.

The missing ingredient — a lack of underlying structures that pin movements to success — perpetuates the cycle of leaderless mass outrage and failure to achieve change. Without representative leadership, there is no one to chew through complex negotiations or mediate between the appalled masses and the ones able to produce outcomes.

A moment in time

Protests can change policies, however, and often have. The George Floyd protests that swept the US, reaching dozens of countries from Germany to Australia, achieved policy change from within city councils all the way to the White House.

Minneapolis committed to dismantling its police force and the New York City mayor, Bill de Blasio, pledged to redirect some of New York City Police Department’s US$6 billion funding towards youth and social services. In Los Angeles, Mayor Eric Garcetti called for US$150 million in cuts to the LA Police Department and the city council introduced a motion to replace the LAPD with unarmed, non-law enforcement agencies to respond to non-violent calls for service. Seattle City Council unanimously passed the banning of tear gas, blast balls and rubber bullets by the police. Donald Trump signed an executive order banning chokeholds unless a police officer’s life is in jeopardy and eight families who lost loved ones to police brutality and racially motivated violence appeared before the US Senate.

But why now? We have witnessed similar scenes before; videos of police beating and shooting young black men are not uncommon. Activists like Shaun King and Angelo Pinto and civil rights lawyer Lee Merritt have spent years trying to electrify the public’s outrage by posting footage from police body cams and onlookers’ phones. Most have led to nothing. Some have spurred the black community into small-scale protests. But the video of a white police officer sinking his knee into George Floyd’s neck for almost nine minutes as he gasped for air and called out for his mother horrified the world over. The outrage reverberated around the world, galvanising public attention and powering up hundreds of thousands of protesters worldwide.

Timing is everything, and perhaps the murder caught the wave of America’s shifting attitudes on race. No doubt the video spread further and grabbed more attention because much of the country was cooped up at home during coronavirus. Floyd’s killing sparked immediate protests in Minnesota, which quickly spread around the nation and then the world.

The Black Lives Matter organisation was at the front of some of the marches, but many protest organisers were not affiliated with a group. Many others seemed to be lacking in cemented leadership altogether, with different people leading the crowds each day.

The decentralised nature of the George Floyd protests sustained the uprising for weeks, re-energising crowds each day and allowing the movement to stay nimble. Authority came about from the number of people who showed up, summoned, of course, through the battle cry of social media. The sheer numbers and endurance of the protesters, who turned up day after day, seemed to trample the need for tactical activism and well-planned procedures.

Without a movement general, an egalitarian spirit emerged, arming each protester with the belief that their voice mattered. That attitude goes to the heart of the movement, one based entirely on equality and justice. In losing its leaders, personal autonomy became the new tactics-driven approach.

Spontaneous assemblies of random activists posed a challenge for elected officials who wanted to end the demonstrations. The “sophisticated tactics” Erica Chenoweth explores in her study were tricky to deploy with no clear leader. Opposition seemed entirely at the hands of a police force who day after day displayed excessive and extreme violence that only served to empower the movement’s online presence and its stamina on the streets.

Among the thousands of marching strangers, new faces were present. The uprising was diverse in nature, comprising, for the first time, many white faces. Even the privileged echelons were angry and out to tear the systems down.

A new generation eager for change was also out in the streets. Newspapers reported on the overwhelmingly young crowds, as throngs of protesters in their teens and 20s marched nationwide. Young leaders in New York formed a coalition, Strategy for Black Lives, focused on education and black youth in their city.

Rewriting the rules of the game

Organic as the demonstrations may have been, the protests cannot be disregarded as mindless, knee-jerk activism. Policy change was successful because a prepared movement existed long before George Floyd’s murder. The Black Lives Matter organisation had been building for years, and alongside it activists and civil rights lawyers were growing communities online. This was a revolution waiting to be sparked, and the video of a chillingly nonchalant police officer murdering a black man accused of forging a cheque did just that.

Preexisting organisations afforded the movement power to force ultimatums, such as popularising and implementing the call to defund the police. Activists have long pushed for the redirection of law enforcement budgets to vital social services as a means of tackling police violence, but such ideas have been dismissed by governments for years as a leftist fantasy. The uprising pulled in mainstream recognition and support for these issues, forcing lawmakers to act.

The rallying cry to defund the police allowed the public to completely reimagine public safety and ask — what best serves the community? Domestic violence intervention, wellness check teams and homelessness support have all been given the consideration they deserve because the protests called for the dismantling of an entire broken system.

Making space in the ring for once-scoffed at or seemingly extreme ideas goes to the heart of what it means to protest. “Protests are about colouring outside the lines, a way for ordinary people to rewrite the rules of the game,” says Zachariah Mampilly in a 2017 TED Talk titled “How protest is redefining democracy around the world”. “Protest has always been the vehicle for expanding our political imaginations beyond what we are told is possible” he says.