Who does Australia owe money to?

Australia, like governments all around the world, has racked up a huge COVID-19 deficit. But who do we owe this money to? We look at how government debt works and what it means for us and future generations.

Amid the life-changing shake-up of 2020, have you found yourself contemplating how to be more financially self-sufficient and less dependent on the structures and systems that no longer serve you? Did this get you wondering how dependent Australia is on other countries and curious about whose money we have been borrowing to pay for our emergency response to COVID-19? Is this leaving us exposed and vulnerable to the whims of countries that may not even share our values and vision for our planet and people?

Finding answers to these questions is not always straightforward, it’s also emotionally risky. Economic updates often spew out statistics and figures that confuse, create fear and stifle any hope for progress towards a sustainable and equitable social, ecological and economic system. We are told that we must lower our expectations for the future as paying off our nation’s debt has become the number-one priority. Currently, the only solutions to this are to increase taxes (reducing our income) or take on more debt (and mortgage our future). These messages leave our parents suffering a reckoning of sorts as they try to come to terms with the kind of debt and planet their kids and grandkids are going to inherit.

But all of this fear around national debt is arguably unnecessary, at least according to several prominent economists including Nobel Prize winner Paul Krugman. So before we get into how Australia’s debt works and who we owe money to, could we use this severe and sudden shake-up as an opportunity to unearth and break down an outdated economic belief that owing money

Are federal government deficits a myth?

It may first sound like an obvious and unhelpful piece of information. But consider the large-scale consequences of this: the Australian government can pay off all of its debt if it chooses to and not suffer from hyperinflation.

We understand that debt is bad for an individual, so logically we assume that it must also be bad for the federal government. Thanks to the recent interest in Modern Monetary Theory (MMT) and the rise in prominence of US economist Stephanie Kelton, who authored the recent game-changing book, The Deficit Myth, we are encouraged to challenge these beliefs. Stephanie obliterates the conventional thinking about federal government deficits and debt. Feeling lost yet? Think of debt as accumulated deficits that arise when the government spends more than it earns. Stay with us.

A simple comparison may be helpful. When we individually borrow money to buy a house, it is against the value of the house (the asset). When the federal government
borrows money, it is also against an asset, but instead of the asset is a building or land, the asset is the productive capacity of the Australian economy (that means investing in job creation, renewable energy, healthcare, education — essentially us and our natural resources). This changes things,

Who does Australia owe money to?

The majority (two-thirds) of our government debt is held by non-resident investors. According to the Australian Bureau of Statistics (ABS), the United States and the United Kingdom are the biggest investors followed by Belgium, Japan and Hong Kong (SAR of China). China is our ninth-largest foreign investor.

Since COVID-19, foreign ownership of our debt has fallen and the Royal Bank of Australia (RBA) has made purchases to keep cash in the Australian economy (aka quantitative easing or the government effectively creating money to buy government treasuries). MMT finds these small short-term cash injections to be ineffective. doesn’t it? As long as the government deficits do not cause inflation, they should not be labelled as “overspending”.

Investors lend the government money and in return, the government pays the investor interest over a set period of time and the original loan amount back. These are called treasuries and they are issued (sold) and then resold in what is called the “secondary market”.

Australian treasuries provide value to our economy in three ways: firstly, as a very low-risk investment option (due to our high credit rating); secondly, for investors as a way for the federal government to get access to funds; and thirdly, to enable trade with other nations.

The only key economic impact that needs to be carefully considered when increasing our debt under MMT is inflation. However, Australia’s debt is relatively low compared to other advanced economies and and our own economic history. Australia’s net debt is currently approximately 26 per cent of GDP compared to 120 per cent of GDP at the end of WWII. Did the government respond by cutting spending and increasing taxes? No, it focused on building productive infrastructure, public housing and employment services to ensure Australians weren’t paying off this debt for generations to come. And it worked.

It is not the debt itself or those who we are in debt to that poses the greatest concern to us or our future generations. It’s that we might become obsessed with deficits and decide to cut spending instead of caring for and protecting our people and the planet.

So is it really a wild, belief-shaking perspective to see the federal budget as a “moral document and expression of our nation’s priorities” as Stephanie does? You decide. 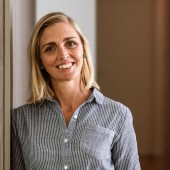 Liz McLardy is an accountant, money mindfulness expert and mama of two. She runs consultations and courses to inspire and empower women to be the masters of managing their money. She combines her business, money management and healing expertise to make money sacred and practical.