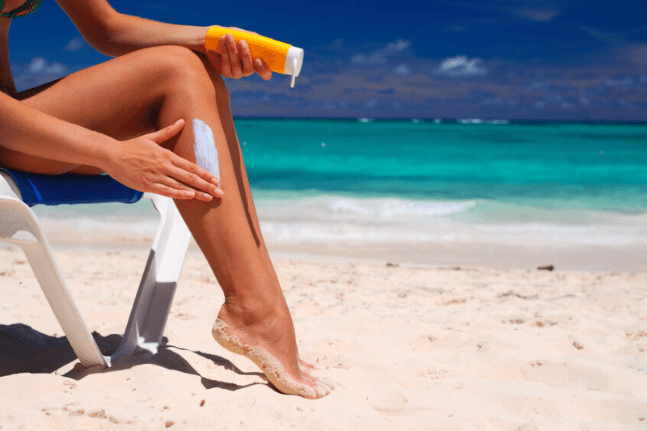 
When you lather on sunscreen you probably do it with the best of intentions hoping to protect your skin against UV damage and the subsequent development of melanoma. Unfortunately, according to new research, if you do that before entering the water near a reef you might be contributing to some dire ecological consequences.

When you hear of coral die off and the threatened nature of reefs you probably are concerned because you care about life on this planet, but there is also a pragmatic dimension to the need to protect coral reefs. The world’s coral reefs are its most productive ecosystems and support commercial fishing and tourism industries. Estimates are that 500 million people depend on coral reefs for their livelihoods. Reefs also protect coastlines from storm surge but the loss of coral reefs affects the entire ocean ecosystem as a quarter of all marine fish species reside in the reefs.

This is the basis of "coral bleaching" a prime cause of coral death worldwide. The concentrations of oxybenzone found in the reef waters was enough to cause death for several coral species.

Current estimates are that 19 percent of the world’s coral reefs are dead. Their major threats are accepted as warming sea-surface temperatures and expanding seawater acidification. However, according to these researchers, ingredients in sunscreen are a problem as well.

Specifically they were looking at a substance called oxybenzone, which absorbs UVB and short UVA rays but is a relatively weak UV absorber overall. However, it also helps preserve the integrity of other cosmetic ingredients, preventing their deterioration under the sun. For this reason, oxybenzone is most often used in conjunction with other sunscreen agents. Besides sunscreen, it can be found in a variety of personal care products such as nail polish, lotions, and lipstick. The problem with oxybenzone is that in humans it has been linked to cancer (melanoma and breast cancer), eczema, and allergies. Now it has also been linked to coral die off.

The researchers in this study dived off reefs in the Caribbean and Hawaii. They took care to wear no personal hygiene products and no sunscreen while they took water samples. Analysis showed that oxybenzone was present in high concentrations around the reefs.

Then in the laboratory the researchers exposed coral larvae and cells from adult coral to varying concentrations of oxybenzone. They found that oxybenzone deforms coral larvae by damaging DNA and trapping them in their own skeleton making them unable to float with currents and disperse. Adult coral cells were also made to expel the algae that normally live inside them, thus losing a valuable source of nutrition. This is the basis of “coral bleaching” a prime cause of coral death worldwide. The concentrations of oxybenzone found in the reef waters was enough to cause death for several coral species.

As of this moment we have lost around 80 per cent of the coral reefs in the Caribbean. It is important that we do things to restore coral reefs like building coral nurseries but we also need to stop doing the things that harm them. It doesn’t mean that we expose ourselves to sun damage but instead of slopping on sunscreen (especially if it contains oxybenzone) then perhaps we should cover up with rashies or wetsuits when we want to share in the wonders of a reef.