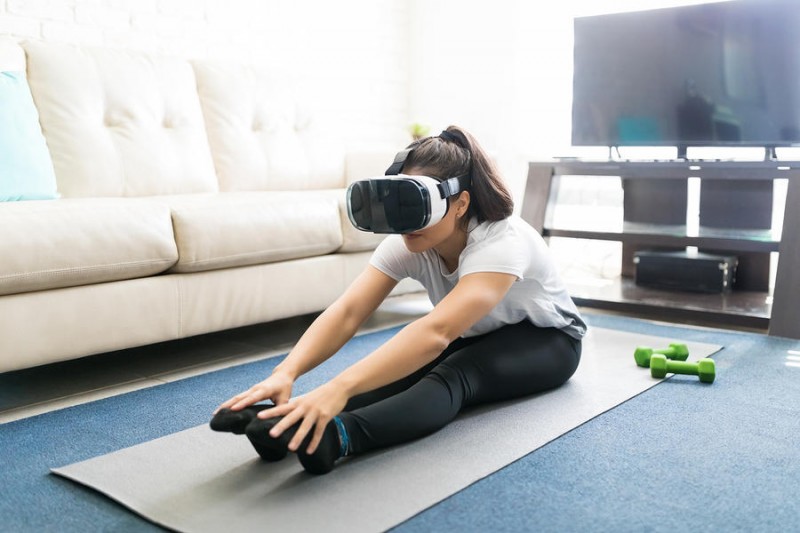 Virtual Reality (VR) is a big part of gaming these days and is seeping into many other areas of life such as surgery, flight simulation and even exercise. Past research has shown that VR is an effective method for pain reduction and decreasing effort associated with exercise. The pain and effort you feel during exercise are very subjective and depend on many psychological factors, including the awareness of your internal body sensations — known as Private Body Consciousness (PBC). But is the effectiveness of VR in reducing the feeling of exercise pain and effort moderated by PBC?

After only a minute the VR group had reported a pain intensity that was 10 per cent lower than the non-VR group.

Researchers from the University of Kent recruited 80 participants into this current study. They were randomly assigned to a VR or a non-VR control group. All participants were required to maintain a 20 per cent isometric bicep curl set as long as they could while they reported ratings on their pain intensity and perception of effort. The participants in the VR group completed the biceps curl while wearing a VR device that simulated an exercising environment. The non-VR group completed the exercise in a room that had a chair, a table and a yoga mat on the floor and no VR devices. The heart rate of each participant was continuously measured along with time to exhaustion, while a questionnaire was used to measure PBC.

The results also showed that PBC had no significant effect on the positive impact of VR. Previous research has shown that people with high PBC understand their body better and as a result perceive higher pain when exercising. But this study showed that VR was effective in reducing perceived pain and that PBC did not lessen this effect. The results clearly show that VR can be used to improve exercise performance as it helps reduce negative sensations, regardless of the levels of PBC.

Source: Psychology of Sport and Exercise