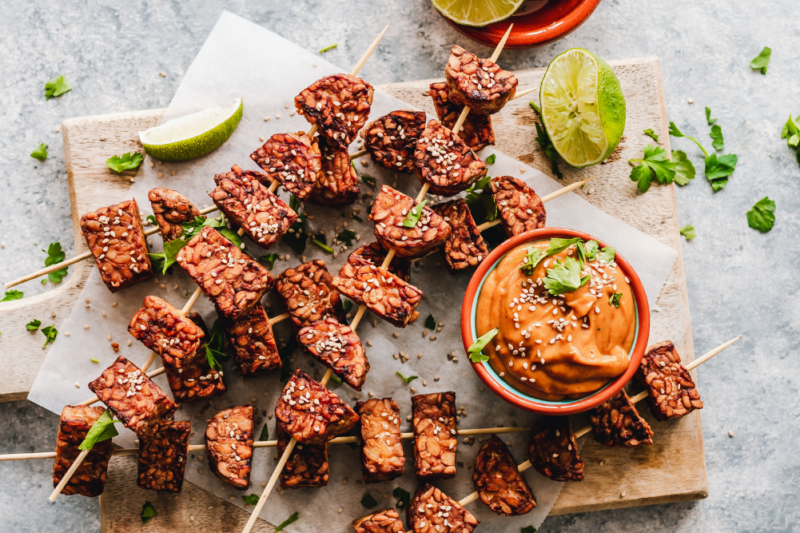 Tempeh is a traditional Indonesian fermented food primarily soaked and cooked soybeans inoculated with a mould such as Rhizopus (commonly R. oligosporus) in a salt-free aerobic fermentation. It has a firm, dry, chewy texture with a slightly nutty taste, and is eaten as a sliced compact cake held together by dense cottony mycelium. It can also be fermented from various beans and grains such as wheat, sorghum, rye, barley and oats, all of which contribute to the texture, flavour and aroma of the tempeh. The fermentation process increases tempeh’s nutritional value and reduces any anti-nutritional components such as phytates, the phytate content being reduced by about one third. One of the many benefits Tempeh is that it is a popular vegetarian meat replacement that is high in protein, prebiotics and a wide variety of bioavailable vitamins and minerals — a very nutritious food.

Important therapeutic components of tempeh are the isoflavones — phytoestrogens with potent oestrogenic activity — genistein, daidzein and glycitein being the most active isoflavones in fermented soy foods, being products of the fermentation process. There are also levels of GABA in tempeh, although these are higher by a factor of 10, with an added anaerobic process during fermentation.

Numerous clinical trials have focused on the isoflavones, particularly genistein and daidzein, in the chemoprevention of breast and prostate cancer, cardiovascular disease and osteoporosis and in relieving menopausal symptoms.

The phytates, while being trypsin inhibitors that reduce protein digestibility, and also responsible for the bitter taste, have also been shown to inhibit tumour development and have significant antioxidant properties. However, the fermentation process of tempeh reduces or eliminates these anti-nutritional components.

Historically, isoflavones have a long record of use in Asian medicine to treat various conditions including diarrhoea, fever, hepatitis, cardiac problems and various cancers.

Gastrointestinal microbiome
Tempeh is highly digestible, and research has shown that eating it regularly, with its high level of prebiotics, improves the microbiome balance, increasing bifidobacteria and lactobacilli, along with beneficial E. coli. This improves digestion and reduces constipation, bloating and cramping.

Antioxidant
Rat studies have compared the antioxidant levels of boiled soybeans and tempeh and found that tempeh has highly biologically effective antioxidant properties that are formed during the fermentation process and therefore were not present in boiled unfermented soybeans.

The isoflavones in tempeh demonstrate both oestrogenic and anti-oestrogenic effects and are transformed into biologically active compounds by the correct gut microbiota during the process of digestion. Genistein is structurally similar to oestradiol (vitamin E2).

After ingestion, genistein has been shown to positively alter concentrations and the balance of hormones including insulin, leptin, thyroid hormone, adrenocorticotropic hormones, cortisol and corticosterone.

Cardiometabolic health
Isoflavones, in interaction with the gut microbes, have been shown to reduce blood pressure and abdominal obesity, regulate cholesterol fractions and abnormal glucose metabolism and reduce inflammation.

Clinical research in humans has shown that the isoflavones in tempeh significantly reduce total serum cholesterol and LDL cholesterol with greater beneficial effects in those with higher abnormalities in cholesterol levels.

Cancer
In animal research the isoflavones in tempeh have demonstrated the ability to reduce the risk of both prostate and breast cancer. The mechanisms of this activity have been researched and the isoflavones have been shown to induce growth arrest and apoptosis or cell death, as well as having antioxidant activity, repairing DNA, inhibiting angiogenesis and metastases, potentiating both chemotherapy and radiation treatments and antagonising both oestrogen- and androgen-mediated pathways.

Neurological
Fermented soy products such as tempeh have shown significant positive changes in improving neurological function, including increasing cognition and reducing the risk of Alzheimer’s and Parkinson’s diseases.

The difference between tempeh and tofu is that tempeh is made through a fermentation process of fully cooked soybeans and tofu is made from curdled soy milk from pressed and crushed soybeans. Tempeh has significantly higher nutrient levels than tofu, and is prone to significantly lower risk of microbial contamination.

Cautions
Soy is a reasonably common allergen, so avoid any soy products including tempeh if this is an issue. All soy foods can have a goitrogenic effect depending on the dose and the preparation, and can lower thyroid function. The phytoestrogens in tempeh can have unpredictable hormonal effects in some people, so check with your practitioner whether this is safe for you. Make sure that the tempeh you eat is organic and is not made from GMO soy. References available on request.