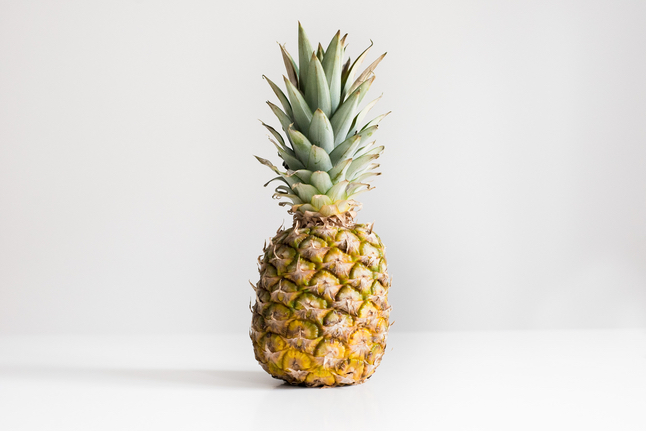 Did you know about the secret healing power of pineapple? This delicious edible fruit comes from a tropical plant — the most economically significant plant of the bromeliad family. Interestingly, the word “pineapple” in English was first recorded to describe a pine cone (from conifer trees), and the fruit was named as it resembled pinecones. The botanical name however comes from the South American Tupi word “nanas”, meaning “excellent fruit”.

The pineapple plant is an herbaceous perennial which, when it flowers with up to 200 flowers per plant, the fruit of these flowers join together to create the “multiple fruit” that we call the pineapple. This fruit is organised into two interlocking spirals — eight in one direction and 13 in the other — a perfect example of Fibonacci numbers.

100gm of raw pineapple contains about 50 calories, with 80 per cent water, 13 per cent carbohydrates (10gm sugar), 1.5 per cent dietary fibre, 0.5 per cent protein and low amounts of vitamins, but with 50gm of vitamin C. While pineapple has relatively low levels of minerals, it is particularly high in the mineral manganese.

Pineapple contains both antioxidant and anti-inflammatory components and it is these that are responsible for the majority of pineapple’s therapeutic benefits.

Manganese plays important roles in activating numerous enzyme systems in the body, including the utilisation of zinc, vitamin B1 (thiamine), vitamin E and iron. It also increases the level of the important antioxidant enzyme SOD (super oxide dismutase). Manganese is vitally important in the maintenance of cardiovascular health, regulation of HDL cholesterol, as well as being involved in regulating blood sugar and supporting skin conditions, bone loss, reduced fertility and problems with balance (middle ear health). It is significantly reduced through food processing.

Pineapple fruits, stems and peels contain a variety of phytochemicals including a range of polyphenols, but its most important therapeutic constituent is the mixture of proteolytic enzymes called bromelain, which makes the fresh juice a handy meat tenderiser.

Pineapple contains both antioxidant and anti-inflammatory components and it is these that are responsible for the majority of pineapple’s therapeutic benefits. The major ingredient, bromelain, is a specific COX-2 inhibitor — one of the most important pathways of inflammation and one that pharmaceuticals have problems reducing without severe side effects.

Bromelain’s anti-inflammatory activities include decreasing the symptoms of pain, oedema (fluid retention and swelling) and platelet aggregation. It may also potentiate some antibiotics.

Many studies have reported an immunomodulatory effect of bromelain. In vitro it activated natural killer cells and increased the production of important anti-inflammatory cytokines.

Bromelain has been used in the treatment of upper respiratory disorders such as bronchitis and sinusitis and to reduce the symptoms of asthma.

Bromelain limited myocardial injury in ischaemia-reperfusion experiments, aiding the function and recovery of the heart. It also increased blood flow to the heart and reduced damage.

Bromelain is being tested for use in the treatment of osteoarthritis and rheumatoid arthritis as well as inflammatory connective tissue disorders such as scleroderma, bursitis and tendonitis. It has been shown to be effective in promoting healing after acute musculoskeletal injury and sports injuries.

Being a proteolytic enzyme, bromelain has many roles in digestion, particularly as people age. The more cooked and processed food we eat, the more digestive enzymes we use up. Supplementing with enzymes such as bromelain can therefore help promote healthier digestion, especially in older people. Bromelain encourages the growth of probiotics such as bifidobacteria and lactobacillus, at least in test tubes that showed pineapple juice as a good medium for probiotic development. It has also been shown to reduce the symptoms of inflammatory bowel disease.

Bromelain has shown positive results in speeding up the process of wound healing and recovery after surgery. There was some concern about its platelet inhibition activity (thinning the blood) but this has not been a problem. The administration of bromelain pre-surgery can reduce the average number of days for the complete disappearance of pain and inflammation post-surgery. It reduces post-operative swelling and oedema. It has also been shown to reduce the swelling, bruising and pain in women having episiotomies.

Bromelain applied topically as a cream is beneficial in the elimination of necrotic (dead) tissue and accelerates wound healing.

With bromelain’s properties of pain relief and wound healing, it was applied after a dental procedure — gingival crafting. This research was conducted in 26 patients for 10 days. The results showed that 500 mg/day of bromelain orally was effective in pain reduction and speeding wound healing. It was also shown not to increase postoperative bleeding.

Pineapple (and bromelain) has been shown to have very low toxicity, and in human trials no side effects or adverse events have ever been observed.