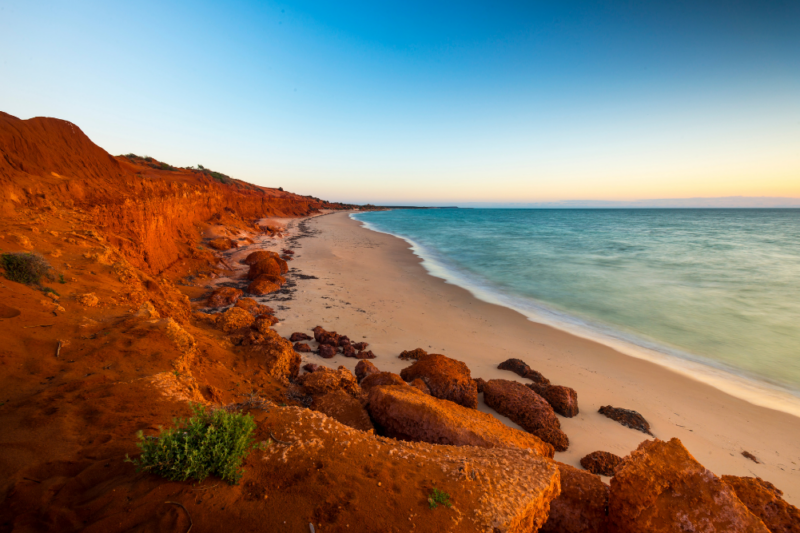 As far west as you can get on Australia’s mainland, in a place so thirsty it has to make its own water, a stunning marine wilderness flourishes. World heritage listed and wild, with overlapping marine and coastal sanctuaries that safeguard 10 per cent of the world’s dugongs, more than 6000 loggerhead and green sea turtles and wild Monkey Mia dolphins, Shark Bay’s credentials are phenomenal.

But what takes your breath away, long before the wildlife encounters begin, are the gin-clear lagoons and opalescent seas that wash over cockle shell beaches and carve shell middens from arcing crimson dunes. By anyone’s imagining this place is remote. It’s hot and dry and incredibly far away, but that’s precisely why I’ve come, to paddle a sea kayak from Denham to Monkey Mia and get as close to Shark Bay’s marine life as I can.

Located 830 kilometres by road from Perth, Denham is a quintessential west coast seaside town: small and welcoming with plenty of caravan park sites and a decent beachfront pub. But it’s what surrounds the town that pulls a crowd: a beach made entirely of seashells deposited 10 metres deep, one of the world’s only ancient stromatolite gardens, and the blissfully faraway Dirk Hartog Island whose first explorer footprints kick-started Australia’s great reveal to the world.

For outdoorsy types, few wild lands rival Shark Bay, with its endless opportunities to explore by boat, sea kayak, on foot and under the sea. But if sand-free sheets and sunset cocktails are more your thing, this place will woo you with artesian hot tub soaks, Indian Ocean sunsets, cultural escapes and dolphin encounters that all connect you deeply with the natural world.

Keen for some sandy-footed solitude, I turn my back on Denham and paddle out to sea, spooking tiny shovel-nosed rays that shoot through the shallows. Snoozy blacktip reef sharks dart away too as my boat’s shadow passes overhead, and I watch it all through two metres of the clearest water on earth.

My kayaking buddy and I paddle boats heavy with four days’ worth of food, water and camping gear, and skirt the tricoloured shores of Francois Peron National Park’s vast, sandy wilderness. Here, campgrounds lure hardy off-roaders with a penchant for clifftop hiking and fishing adventures, but with so much coastline to share, we don’t meet any other explorers.

Instead, it’s the wildlife that outnumbers us: green sea turtles foraging on the seabed and bottlenose dolphins that hunt expertly beneath our boats.

Not surprisingly, for a place called Shark Bay, we encounter biters too. One massive tiger shark rises suddenly, separating our boats off Cape Peron and sending us startled and swiftly paddling to the safety of the shallows.

Despite its name, dolphins are the darlings of Shark Bay and the females that commune at Monkey Mia are world-famous. Back in the 1960s, a local fisherman sharing his catch with the dolphins kick-started an almost-daily ritual off Dolphin Beach. Today, a small pod of wild females create rapturous encounters for those standing ankle-deep in Monkey Mia’s idyllic blue cove.

These feeding sessions are dubiously “wild”, but thrilling nonetheless, strictly controlled by national parks staff and designed to keep the females hungry enough to continue natural foraging. Only five female adults are regularly fed, but with their offspring in tow, you’ll get to see tiny juveniles too.

If the spectacle feels touristy, you need only hire a kayak or stand-up paddleboard from the beach shack at Monkey Mia Resort, or let Malgana man Darren “Capes” Capewell reinterpret the scene from an Indigenous perspective as you paddle across Shark Bay. Malgana language is in the process of revival here, which traditional owners call Gutharraguda, meaning Two Waters. The last elders took their secrets to the grave in the 1990s, but camping and paddling trips with Wula Gura Nyinda Eco Adventures rekindle this almost-lost culture, and add a deeper layer to an otherwise indulgent stay at Monkey Mia Resort.

The best dolphin display you’ll ever witness on this coastline takes places northwest of Monkey Mia off Cape Peron, a spot halfway into our paddling adventure. Here, a pod of female bottlenose dolphins has developed a hunting technique that’s been studied by scientists the world over. What they do is remarkable: rounding up sea mullet in the shallows, herding them onto the sand and hydroplaning dangerously in less than a foot of water to snare their feed. The hunt is rarely captured on film, but National Geographic’s Dolphins, The Wild Side reveals it well.

Before we reach Cape Peron where the hunt takes place, we pull off the sea at Gregories Beach to swap paddles for snorkelling masks and fin out along the bay’s coral-fringed wall. By sunset we are climbing the rust-red dunes high above to discover pioneer-era pearling relics and Indigenous shell middens buried on the edge of the sea, adding our clumsy footprints to a nocturnal maze of tiny marsupial tracks.

Back in 1801, when French anthropologist François Peron first visited the peninsula, its wildlife was abundant: 23 species of woylies, rufous hare-wallabies, quendas (southern brown bandicoots) and bilbies. But European settlement, sheep farming and the rabbits, foxes and feral cats they unleashed on the wilderness took their toll, sending these fragile creatures to extinction.

Decades of intervention, including sealing off the entire peninsula behind a two-metre high barrier fence, have failed to resurrect the ecosystem, and captive breeding and release programs have returned only two species to the wild — the greater bilby and the mallee fowl.

All may not be lost. On Faure Island just offshore, reintroductions have had more success and these may throw the Francois Peron National Park mainland sanctuary a lifeline one day soon. For now, the national park’s saltpan birridas and red dunes lie in wait, inhabited by self-sufficient travellers who four-wheel drive 50 corrugated kilometres to peer from lofty lookouts into the sea at Skipjack Point.

At the very tip of the Peron Peninsula, the Wanamalu Trail — the only formed track in the national park — winds one-and-a-half kilometres from Cape Peron to Skipjack Point along a knife-edge of sheer, 250,000-year-old Peron sandstone cliffs. Lookouts overhang white-sand shorelines where cormorants, terns and gulls move in a restless dance between crumbling red cliffs and an aquamarine sea. Swift eagle rays shoot through the shallows and mullets keep a wary eye out for approaching bottlenose dolphins. On this cool winter’s morning, we find dunes ablaze with Shark Bay daises, yellow wattles and wild tomato bushes.

Turning southeast, across Herald Bight towards Monkey Mia, where cold beers and crowds await, we struggle against headwinds and our own shark-driven fears. Like all seas lucky enough to foster healthy marine ecosystems, Shark Bay nurtures plenty of shark species. But tiger sharks have always kept me on my toes — territorial and enormous — despite the fact that encounters in the water and in kayaks have never caused me harm.

Paddling into Monkey Mia at the trip’s end is bittersweet. Although we desperately crave a hot shower and a meal with crunch, four days of complete seclusion leaves us unsteady among the crowds, so we load our kayaks onto the 4WD and set out to find an empty beach.

A 20-minute drive out of Denham, we pitch a tent at Eagle Bluff to swim and snorkel and watch ospreys snatch fish from the sea. Later, in hypersaline Hamelin Pool, where a rare colony of ancient stromatolites flourishes to the exclusion of all other life, we decide that the Down Under author Bill Bryson was wrong.

These fascinating, ancient examples of the first life on earth are much more than the large cowpats Bryson claimed them to be. Having dominated life on earth for 80 per cent of its long history, quietly generating the oxygen needed for everything else to flourish, stromatolites remind me that looks aren’t everything when it comes to survival. That they exist here, and at only one other place on the planet, makes perfect sense. Shark Bay is extraordinarily special.

Elsewhere on Shark Bay’s 2.2 million hectares of wonderland, on a beach bereft of sand, we scoop up handfuls of tiny, white cockle shells swept ashore by the tide in their trillions and stacked 10 metres deep. Estimated to be up to 4000 years old, these Hamelin cardiid cockle shells stretch for 60km along Shell Beach, where we crunch our way to the water’s edge and float buoyantly in an impossibly salty sea that stretches to the far horizon.

West from Shell Beach, the Edel Peninsula points its rugged, bony finger of rock towards the end-of-world scarps at Zuytdorp Cliffs. Officially the most westerly point on the mainland, these are the legendary limestone cliffs that shipwrecked centuries of early Dutch, French and British explorers, and continue to steer terrified sailors well off the coast today.

Instead, the Edel Peninsula lures self-sufficient anglers and beachcombers to faraway camps. Giant pelagic fish feed close to shore, but snaring these big tuna and spangled emperors, and hauling them 12 metres back up the cliffs, is a technique that demands practice.

The camping is grand, the facilities absent, but to stand 250 metres above the rebounding sea and touch the very last of each day’s rays is a truly West Australian privilege that’s not lost on us. When the last of the drinking water runs out, Denham welcomes us back from the wilds, and we end the trip in style, perched on the edge of the historical Peron Homestead’s pioneer-era hot tub.

My still paddle-sore body is primed for a deeply relaxing soak but the water flowing from deep underground is scalding — simmering at a red-hot 44 degrees — and almost too much to bear. I gingerly dunk my toes, slowly slipping in, bit by bit, until before I know it I’m up to my neck, steaming and sweating and feeling dangerously disconnected from my body.

Locals say these mineral-rich waters provide the quintessential ending to every Shark Bay adventure, soothing weary bones and clearing minds. But there’s no way around it, it’s one hot pond. I follow my hot dunk with an exhilarating icy shower and feel invigorated to the bone.

Get there
By road, Denham is 830km north of Perth. The flight path from Perth takes you to Carnarvon, where you can hire a car for the 320km-long road trip south to Shark Bay.

Go
Visit from June to October for whale watching and wildflowers. 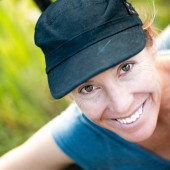 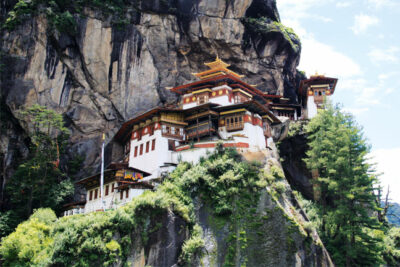 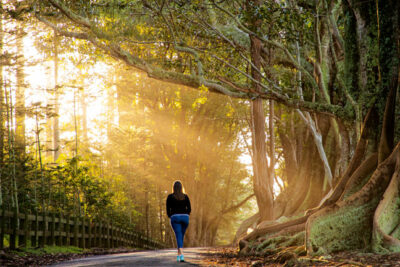 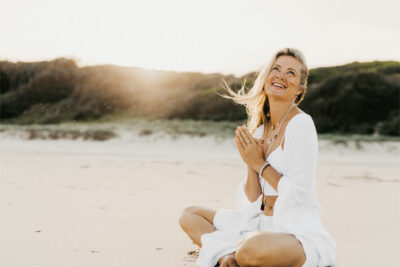 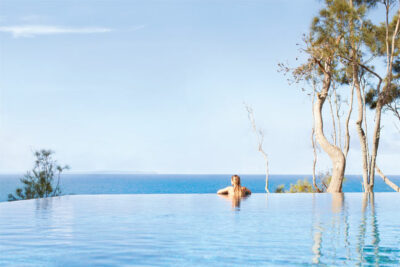