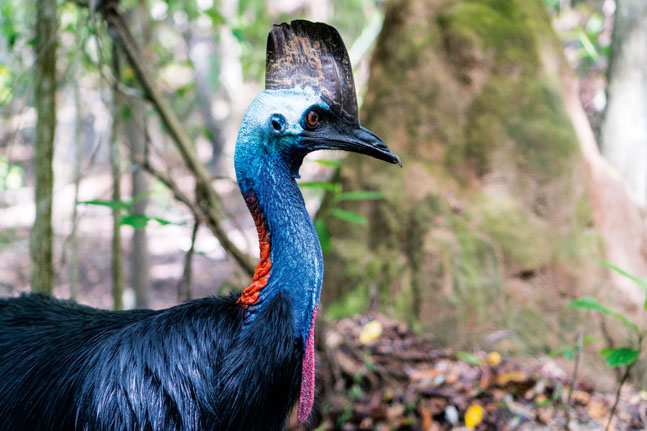 
Found only in tropical north Queensland, the cassowary is most frequently sighted in Mission Beach, 140km south of Cairns, where rainforest spills onto 14km of idyllic, tricoloured coastline and the highest density of cassowaries is found. But that’s nothing to brag about.

Sighting a cassowary in Mission Beach might be easy but it’s not because there’s a lot of them left. In fact, the town’s forests may harbour as few as 50 adult birds — nobody knows for sure — and refuge for these endangered creatures is dwindling.

As developers continue to carve up what’s left of available land squeezed between the Coral Sea and the soaring mountain divide to the west, the cassowary’s future looks ever bleaker.

Today, there is little natural habitat left for the cassowary to call home and this solitary creature is being forced out of the ever-shrinking Licuala palm forests and into suburbia.

Today, there is little natural habitat left for the cassowary to call home and this solitary creature, which favours a solid seven square kilometres of territory, is being forced out of the ever-shrinking Licuala palm forests and into suburbia.

On a daily search for food, mates and new territories, Mission Beach cassowaries are leading their chicks down a risky path: through high-speed traffic, into backyards and farms, encountering backyard dogs and hand-feeding humans en route.

In February this year, a juvenile cassowary died after being hit by a car in Mission Beach. Some reports suggest that locals had regularly fed the bird, luring it in, but this is not an isolated incident. So far this year in Mission Beach, three cassowaries have died on its roads and others await recovery and release from the town’s purpose-built cassowary hospital. No one knows how many more fall prey to dog attacks and pig traps each year.

I set out to meet the cassowary on its traditional turf in Djiru National Park, Mission Beach’s last large stronghold of Licuala ramsayi (fan palm) forest. The most spectacular of all palms, the Licuala raises its two-metre-wide fronds 15 metres overhead, blocking out the sun with their vivid green mosaic and littering the forest floor with fragrant fleshy fruit that cassowaries adore.

As I wander, epiphytes stud the high canopy and, trackside, giant strangler figs throttle their hosts while thorny tendrils of lawyer cane grip their way through the forest. I tread carefully, quiet in my early morning solitude, but the encounter I’d hoped for in this impossibly thick forest never comes.

My search continues along Lacey Creek where I sit by serene, freshwater pools, and later, on the Cutten Brothers Track, following bright blue Ulysses butterflies along a path strewn with wild nutmeg, past pandanus palms and bush almond trees towards the open sea. The views are surreal but it’s not until I leave the forest completely that the cassowary finds me.

Deep in suburbia, well out in the open, a curious cassowary wanders past, ignoring our small human gathering but inconceivably close. I’m utterly euphoric but the vulnerability of the encounter leaves me breathless. What happens to that cassowary next? A dog attack, a car rushing by, trapped by a backyard fence: all potentially deadly obstacles in the cassowary’s daily search for food.

It’s a scene that award-winning conservationist and artist Liz Gallie knows well. A cassowary named Joov ranges her own patch of Mission Beach paradise, leading his trio of chicks across a busy Bingil Beach intersection to cool off in a creek close to home.

“My heart is in my mouth when I know he’s going to cross that road,” Liz laments. “It’s highly likely that Joov will end up as roadkill.”

A fierce defender of the cassowary, Liz Gallie has observed them for 40 years in Mission Beach and fears they may soon reach a point where the species can’t possibly be saved.

Tackling the enormous challenge of saving the cassowary means buying back land, revegetating wildlife corridors and encouraging locals and visitors to get on board

“Their behaviours have changed enormously,” she says, an adjustment to the fact that roads and urban development have severed the traditional pathways that link the forests where cassowaries forage. “They have to come out into the open where they are seen and they are not shy any more.”

Cassowaries in Mission Beach have learnt that people mean food and their search for it is taking them into dangerous new territories. Moreover, says Liz, suburban noise is interrupting how they communicate and the birds and their offspring routinely play chicken in traffic that zooms past at 80km/h.

Peter Rowles, president of C4 (the long-standing Community for Coastal and Cassowary Conservation), agrees that the threat of traffic and dogs endures. When I make contact with Peter, I find him at Mission Beach’s cassowary hospital, delivering native forest fruits to a juvenile cassowary that has just been hit by a car.

“Thankfully, the driver slowed down before it hit the bird, so it’s still alive and looks set to be released in the next week,” Peter says. “Alarmingly, though, a dog turned up on the road while we were at the scene of the road accident, within the first half-hour of a bird being hit,” he says.

Peter admits that dogs and roads remain a serious threat but says that habitat loss remains the number-one challenge for cassowary survival: “If we continue to lose habitat then little by little we will lose the birds, but it’s the connectivity for the cassowary that’s important, protecting secure corridors between areas where’s there are still good patches of forest. The presence of dogs and roads only restricts the movement of birds and makes things worse.”

Tackling the enormous challenge of saving the cassowary means buying back land, revegetating wildlife corridors and encouraging locals and visitors to get on board — and that’s what C4 does best. The volunteer-run group has harnessed great community enthusiasm to spearhead four local replanting projects and is working with a host of government and like-minded conservation groups across the far north on an ambitious plan to build and protect a wildlife corridor from Mission Beach all the way to the Tablelands.

With a beachfront environment centre that acts as the town’s premier visitor centre, a thriving nursery and a replanting work going on, the team at C4 is not giving up without a fight.

Liz Gallie is not so upbeat. She fears that compassion for the cassowary is no longer a part of the local psyche. As the town’s population rapidly increases, drawing in outsiders who don’t remember this once laidback village’s halcyon days, so does traffic flow, the demand for land and an overwhelming eagerness to make money off the spiking tourism sector.

There’s money to be made in Mission Beach but, even under the guise of “eco-tourism”, Liz Gallie says the environment has taken a back seat and she for one is losing heart.

“It’s very difficult to watch as the special values [of this place] are steadily eroded by unnecessary and inappropriate development, especially during economic booms and perceived development opportunities following natural disasters such as cyclones,” says Liz.

“Our natural environment is our main attractant so we’ve got to protect it, understand it and listen to our experts. We need to understand the importance of the need for cassowary corridors and a connected habitat.

“We need a government that leads with compassion and looks at the wellness of our communities,” she says. For now, she fears, the cassowary might just have become far too difficult to save.

But Peter Rowles is staying optimistic: “We have a lot of protected areas [in Mission Beach] and, even though we do have problems with development, we believe that, by expanding the cassowary’s habitat through land buy-backs and by increasing the connectivity of their forests, Mission Beach will continue to have a thriving population of cassowaries.

“These birds will not go extinct on our watch.”

Mission Beach is located 140km south of Cairns (book airport transfers at missionlink.com.au). Visit over the dry season (May to September). Don’t miss the Cassowary Festival (September 21 each year).

If you are lucky enough to spot a cassowary in the wild, keep your distance. Never approach cassowaries or their chicks (males will defend them), never feed them and do not let them approach you. Most importantly, slow down when driving through cassowary habitat.

At two metres tall, weighing 65kg and reaching speeds up to 50km/h, the cassowary (Casuarius casuarius johnsonii) is a force to be reckoned with. Although attacks are rare, when threatened (especially when guarding eggs or chicks) the cassowary may deploy a dangerous and unpredictable weapon, the powerful dagger claw in the middle of its three toes.

The southern cassowary belongs to the most primitive group of birds, the ratites (flightless birds), and is one of only three species of cassowary in the world. The only other ratite living in Australia is the emu.

Classified endangered and restricted to wet tropical rainforests between Ingham and Cape York Peninsula, the cassowary’s numbers are unknown. There may be as few as 1500 in the wild — dire figures for a keystone species whose habit of eating and dispersing rainforest plant seeds makes it vital to the survival of these rainforests.

The continued loss of habitat through land clearing and fragmentation, along with the menace of domestic dogs, speeding cars, disease, shooting and accidental capture in feral pig traps, have all contributed to the cassowary’s decline. 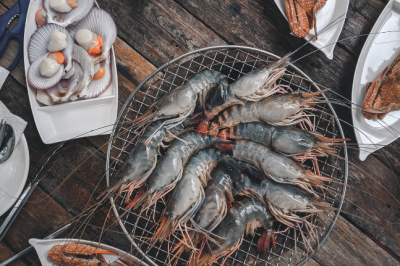 Can a seafood diet ever really be sustainable? We take a look

Global seafood consumption has quadrupled over the past 50 years and interest in environmentally conscious fish choices has grown. But... 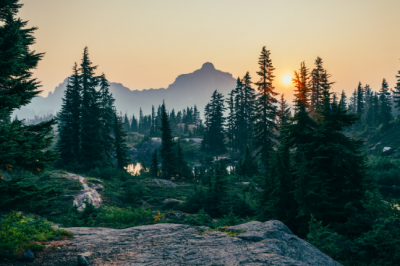 Nature prescriptions, drones in the forest and more of the latest environment news

Can time in nature really decrease depression and anxiety? And what's does Europe's "green deal" mean? We take a look... 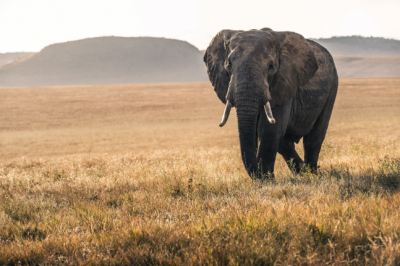 From elephant trails to a planet-friendly diet, here's the latest in conservation news

We take a look at the latest studies and research to bring you important environmental and conservation news, from animal...