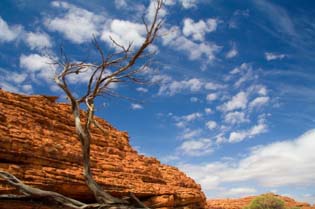 In the Pilbara, a large region extending east from the coast of northern Western Australia, a history of mining and more recent liquid natural gas (LNG) developments have led to heavy industrialisation in some parts. As the LNG industry expands, there is now a risk that the largely uninhabited Kimberley to the north will be subject to the same pressures. However, many people, including environmentalists and some Aboriginal traditional owners, are keen for it to be preserved in its present wilderness condition.

Around the inland Pilbara towns of Newman and Tom Price, iron ore is mined and then transported by rail to coastal export facilities at Dampier, Port Hedland and Cape Lambert, from where itâ€™s sent to China. Of these three, Dampier, a town near Karratha, has attracted particular controversy because of its location at the bottom of the Burrup Peninsula.

This finger of land, which is about 27km long and 5km wide, is remarkable for possessing the worldâ€™s largest collection of rock art. Up to a million Aboriginal petroglyphs (images engraved or drawn on rock) portray fish, birds and animals and a variety of abstract or geometric shapes. Often referred to as a giant outdoor art gallery, it has also been described as Australiaâ€™s Stonehenge. Covering a continuous 30,000-year history, itâ€™s believed to contain the oldest rock art in the world.

Unfortunately, despite its heritage values, the peninsula has not received the protection it deserves. A portion was destroyed when the Dampier iron ore port was built in the 1960s. Later, when Woodside Petroleum built an LNG gas plant in the 1980s to service its North West Shelf operations, about 1800 petroglyph-marked boulders were moved into a storage compound. In traditional Aboriginal culture, once a rock has been moved, its spirit is broken and it becomes essentially meaningless.

A couple of years ago, Woodside received state and federal approval for its Pluto project, involving a second onshore processing plant on the Burrup. This is currently under construction, with completion expected next year. According to Sylvia Hallam of the group Friends of Australian Rock Art, a site rich in petroglyphs was chosen when existing industrial land a few kilometres up the road could have been used instead.

In addition, the Aboriginal traditional owners are unhappy about not having been consulted. Wilfred Hicks of the Wong-gg-tt-oo is not opposed to development but believes there are other suitable sites along the coast. His views are shared by other energy companies. BHP Billiton, Chevron and Apache Energy have all chosen to develop away from the Burrup, with heritage issues among their stated reasons.

It has been estimated that to date 5-25 per cent of all petroglyphs have been destroyed, with an exact figure very hard to gauge. Rock images are potentially under threat from industrial emissions from new and existing development. In 2003, the World Monuments Fund added the Burrup to its list of Most Endangered Sites and last year the World Archaeological Congress called for the destruction to stop.

Although the Burrup was added to the National Heritage List in 2007, the Woodside lease was deliberately excluded from the designated area. For rock art aficionados, the Burrup is suffering from piecemeal heritage advice that fails to plan for the site as a whole. Furthermore, according to Friends of Australian Rock Art the site is suffering from lax management and easy access, which has encouraged vandalism and other damage; it believes that real protection can only be achieved through World Heritage listing.

While in opposition, WAâ€™s Coalition Premier Colin Barnett urged protection for the Burrup, saying further industrial development should take place away from the rock art. Now, in his new role, he has changed his mind and asserts that industry and Aboriginal rock art can co-exist.

We can only hope that lessons have been learned for the future.

Little known to the rest of the world, the Kimberley is an enormous region about twice the size of Victoria. Its rocks are 120 million years old and the range of natural features includes savannahs, wild rivers and wetlands. Sparsely populated and largely unexplored as a consequence of its remoteness and often rugged terrain, it is one of the worldâ€™s most unspoilt places.

The Wilderness Society (TWS) believes the Kimberleyâ€™s wilderness values are comparable to those of the Great Barrier Reef and the Amazon. Although it has its share of rare, threatened and endangered species, no mammal there has ever become extinct. As such, it is unique in WA and one of only a few such regions in Australia.

The Kimberleyâ€™s offshore waters are home to the worldâ€™s most important humpback whale calving grounds and to other threatened species including the dugong, flatback turtle and snubfin dolphin, found only off northern Australia. The seagrass close to shore provides food for dugongs, turtles and many other marine species.

Whereas most coral reefs are found relatively close to land, those of the Kimberley coast lie in deep water. Extending about 600 kilometres in length, they are very diverse and among the least impacted in the world. Montgomery Reef, in particular, is famed for its beauty, made more spectacular by the torrents of water that sweep across it every day when the tide is falling. In the estimation of WAâ€™s Department of Environment and Conservation, the extent of the Kimberleyâ€™s reefs may rival the Red Seaâ€™s celebrated fringing reefs.

While LNG from the North West Shelf is transported via pipeline to the Pilbara, plans have been drawn up for a further LNG hub in the Kimberley region to process gas drilled at the Browse Basin, 400 kilometres off the coast. This onshore project involves five joint venture partners â€” Woodside, Shell, Chevron, BP, and BHP Billiton.

Australian LNG is shipped to export markets in Japan, China and South Korea. In August 2009, PetroChina agreed to buy AUS $50 billion worth of LNG, 2.25 million tonnes a year over the next two decades, from the yet-to-be-developed Gorgon field off the coast of Western Australia.

Although LNG is a fossil fuel, with the recent attention given to the CO2 emissions from coal-fired power stations, LNG, as a lower-carbon option, is likely to see increased demand, particularly if a global decision is reached on emissions cuts. As a result, we are already hearing the argument that gas development in the Kimberley would ultimately be good for the environment.

Early this year, Barnett announced that the facility would be built at James Price Point, an unspoilt stretch of coast located about 50 kilometres north of Broome. This site was picked from a shortlist of four feasible locations, following a negative state government environmental report on another site at North Head further up the coast.

However, the James Price coastline is not a done deal. While Woodside (as the 50 per cent partner) is very keen to press ahead in the Kimberley, at the time of writing the other companies are reported to be more interested in the cheaper option of tapping into existing infrastructure near Karratha. The feasibility of such a possibility is confirmed in a Commonwealth report, but received a setback in July when Barnett vowed to block any pipeline running from the Browse Basin to the Pilbara as a means of ensuring the Kimberley gets the gas plant.