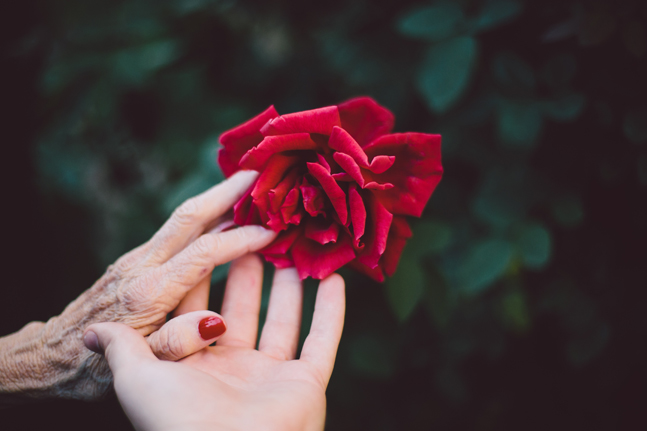 
When Marlene, 66, couldn’t find her car keys for the second time that week, she chalked it up to simple forgetfulness. But then daughter Cassie noticed her mum had the occasional memory slip and was acting out of character. The once health-conscious business owner quit her weekly social tennis and lost interest in her business. After being diagnosed first with depression and seeking the help of various health professionals, tests eventually showed Marlene had dementia.

“People often see it as you have a life before dementia and a life after dementia, but there are still a lot of areas where you can contribute and have [a] very good quality of life.”

Dementia is a degenerative brain disease; its most common form is Alzheimer’s. In 2017 it became Australia’s biggest killer of women and second biggest killer of men, behind heart disease. According to Dementia Australia there are more than 413,106 Australians living with dementia, which is tipped to rise to around 1 million by the middle of the century. Generally, it affects people over the age of 75, but those in their sixties, fifties and even forties can be diagnosed with early onset dementia.

Dementia is far more complex than just forgetting people’s names or wandering off. It can affect mood, emotions and things that might surprise you, like fine motor skills. For example, doing up buttons or eating with a knife and fork can be challenging.

It’s more than just getting older

Often dementia is perceived as just part of the ageing process, but it isn’t. Professor James Vickers from the Wicking Dementia Research and Education Centre at the University of Tasmania says dementia differs from age-associated impairment because it impacts on more than just memory. “It can also affect personality, behaviour and motor skills. It’s a disease process that creates pathological changes in the nerve cells of the brain,” he says.

Professor Vickers says dementia impacts on not only families but society as a whole and its effects are far reaching. “People often see it as you have a life before dementia and a life after dementia, but there are still a lot of areas where you can contribute and have [a] very good quality of life.”

Stamping out the stigma

Dementia is shaping up to be the biggest public health issue of the 21st century, so why isn’t it talked about? Unfortunately, there can be a sense of embarrassment associated with dementia, which Professor Vickers says can prevent people reaching out for help. “Some people who have dementia feel ashamed, so it’s not really openly talked about, and that generates a lot of fear,” he says.

If someone you know and love has dementia, find out as much as you can about it and encourage them and other family members to do the same. In a situation in which you may feel powerless, knowing, understanding and accepting as much as you can will help you find new ways to communicate and build a stronger relationship with the person who has dementia.

Make precious memories and treasure the moments. The person you love is still there. Look through old photographs. Share a favourite dessert. Have a picnic by the beach. Tell them how much you love them and tell them often.

There’s no denying that a dementia diagnosis can be frightening. Maree McCabe, CEO of Dementia Australia, says there can be many unanswered questions. “What will my life be like? What does my future hold? What is it going to be like for my loved ones? This is where open and honest communication can pave a positive way forward,” she says. Find out what they are most fearful of and address those things. It might not be what you think. “They might be worried about leaving the workforce, or family and friends abandoning them.”

Dementia is a very individual experience. No two people who have it will be the same, so getting informed is vital. “The more information people have, the better equipped they are to deal with future plans and the challenges that can arise,” adds McCabe.

Looking after yourself is also important. There’s a lot of evidence to suggest lifestyle factors play a big part in not only reducing the risk of dementia, but if you have dementia, a healthy lifestyle will keep you well for longer. Staying socially engaged, getting regular exercise, keeping mentally stimulated, eating well and paying attention to heart health can all help.

Dementia can have a profound impact on families as the child takes on the role of parent, or the partner becomes the carer.

As a dementia diagnosis progresses, Cassandra Kazik, occupational therapist at the Brain and Mind Centre at University of Sydney, says getting together with family to discuss positive ways to move forward is crucial. “The more frequent communication about challenges or what’s working well, and the more family members on board, the better,” she says.

Family members may also not always agree on care. This is where having conversations with family early on is vital. Where possible, Kazik says, regular family meetings can help. “I know a family who get together every two weeks to discuss the previous two weeks, and then plan the next two. It’s a very formal approach that works well for them.”

As the person’s dementia journey continues, they may find they can no longer do some of the things they did before. Help them to let go of those things gracefully and find new ways to continue doing the things they enjoy.

Karl could no longer play regular golf with the boys he’d played with every Saturday for decades, but he’d still join them afterwards for a cool drink and a chat.

Joselyn loved to cook and, even though she passed the chef’s hat to her husband, she still liked to bake occasionally with the help of her daughter, Carla. They’d share hugs in the kitchen and lots of laughter, which of course pumps up the feel-good hormones. Having a chuckle can help to heal.

Sharmaine’s mum was an avid bushwalker. While she couldn’t navigate the rocky trails, she’d still get together with her two grandchildren in the early morning sunshine and stroll hand in hand through parkland and stop to feed the ducks.

The changing brain [with dementia] can result in positive new creative skills. A study showed that some people with frontotemporal dementia may begin to draw, paint or appreciate music.

Make precious memories and treasure the moments. The person you love is still there. Look through old photographs. Share a favourite dessert. Have a picnic by the beach. Tell them how much you love them and tell them often.

McCabe says the key to living well with dementia is to live your best life. “It’s maintaining a quality of life that’s as good as it can possibly be and continuing to do the things that are important to you,” she says.

Here’s a little-known fact about dementia. The changing brain [with dementia] can result in positive new creative skills. A study by associate professor Olivier Piguet and professor Akira Midorikawa showed that some people with frontotemporal dementia may begin to draw, paint or appreciate music.

None of this, of course, negates the fact that a diagnosis of dementia is life-changing. As Jenny Fitzpatrick, carer of her husband who has dementia says, “Living positively with dementia doesn’t mean denying the pain and grief. For me it’s summed up in this quote: ‘Life isn’t about how to survive the storm, but how to dance in the rain.’”

If someone you love doesn’t remember you, it can be hurtful and with dementia that can happen. But make sure you remind yourself that it isn’t the person’s fault — it’s the disease. McCabe says often people with dementia recall old memories with clarity but recent memories are a mystery. “If they don’t remember you, it could be linked to their old memories in which you looked much, much younger,” she says. “People might not recognise your face, but they know they love you.”

Make the most of all of those special moments you share. And talk about the past. It can be a rich and rewarding experience for the person with dementia.

When talking to a person with dementia, it’s important to be calm and gentle. McCabe says it helps to not give too much information at once. “People can find it challenging, processing what’s being said,” she says. “Lengthened pauses and speaking slowly can help, and don’t correct them if what they say is wrong — because it actually might be true for them.”

Oliver James, author of Contented Dementia, drew inspiration from his mother-in-law Penny Garner, who developed a person-centred care model when he was penning his book. He writes that she has three basic truths for better communication.

Caring for the carer

Carers UK, who have studied impacts of dementia on families, suggest 57 per cent of carers lose touch with family or friends as a result of their caring responsibilities, leading to increased isolation and emotional distress.

The challenge of caring for someone with dementia can be enormous. In that same study, many carers felt others didn’t understand the physical and emotional toll it placed on them. Kazik says it’s vital that carers have some respite. “It’s often a huge step for a carer to ask for help, but it’s vital that carers take some time out to replenish their energy reserves and look after their own needs.”

Check out the Dementia-Friendly Home app by Dementia Australia.

This is an interview with Kate Swaffer, who was diagnosed with younger onset dementia at age 49. Kate’s an author, poet, academic and avid blogger. She lives with her husband who she fondly refers to as her “Back Up Brain” and says their relationship is even closer than when they first married.

How did you feel when you were diagnosed?

It was a huge shock! Initially, I cried for weeks. Healthcare providers told me to “go home, give up work, give up study, get my end-of-life affairs in order and get acquainted with aged care”. I termed and trademarked this as Prescribed Disengagement®, and it still too often happens to newly diagnosed people.

Dementia isn’t well understood; many healthcare professionals are undereducated in dementia and many still consider it an older person’s disease. It’s too often thought to be a mental illness, which it is not.

Living positively with dementia has been made possible in large part due to regular blogging and other writing for many years, rehabilitation and many daily positive psychosocial interventions such as meditation and mindfulness. Continuing to study as a tertiary student at the University of Wollongong, and living as positively as possible have also contributed. I aim to enjoy the days I am still alive!

What’s it like being outside the usual demographic for dementia?

People don’t believe it, and we get accused of faking it. Ignorance is what causes the stigma, discrimination and isolation that so many of us regularly experience.

Has your diagnosis strengthened your relationships with others?

I’ve become much closer to some of my long-time friends and my husband and sons. I’ve also become close to many people in my “global dementia family”.