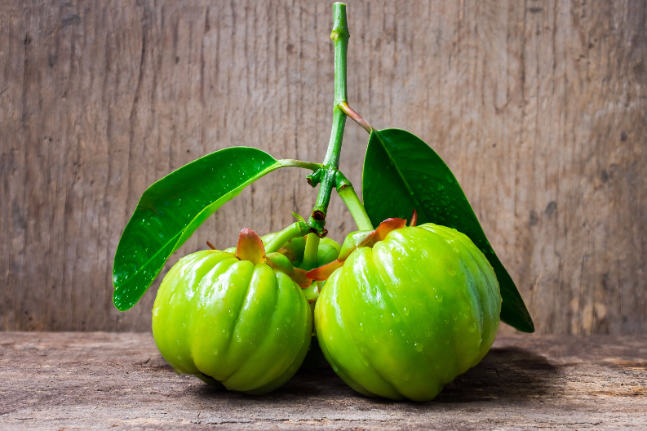 
Garcinia cambogia (garcinia gummi-gutti, brindleberry or Malabar tamarind) — call it what you will — is an important tropical plant native to Indonesia. The fruit looks like a small pumpkin, varying in colour from green to yellow to red-orange. It shares culinary uses with the other tamarinds (Tamarind indica) as a souring agent, particularly in fish curries. The dried rind of the fruit is used in curing fish and, in combination with salt, acts as a bacteriostatic, preserving the fish. The extract and the rind are used for the sour flavours, and in Ayurvedic medicine sour flavours are reputed to activate digestion. The fruits are edible but are very acidic and generally not eaten raw.

The main active ingredient of garcinia, known as HCA or hydroxycitric acid, has been used for a variety of medicinal purposes. Garcinia supplements contain from 20 to 60 per cent hydroxycitric acid (HCA), while the fruit contains 10–30 per cent HCA. Garcinia also contains high levels of vitamin C and a range of flavonoids.

Garcinia is commonly used as an appetite suppressant; however, most studies have been conducted on rats and there’s some debate about the human equivalent. In traditional medicine it was used as a food-bulking agent, so this is a possible mechanism of action. In mice it measurably reduces visceral fat (around the abdomen), the position of which is indicative of increased risk metabolic disorders such as diabetes.

In human studies, HCA has been shown to be effective in decreasing appetite, inhibiting fat synthesis and reducing body weight. Taking 300–500mg of HCA a day for 14 days has been shown to reduce body weight as well as the 24-hour energy intake in humans, although appetite profiles remained unchanged.

Garcinia has been shown to decrease triglyceride and LDL levels and increase HDL levels.

HCA has shown an ability to regulate serotonin similar to the SSRI drugs (selective serotonin reuptake inhibitors) in vitro. This may be an explanation of the potential effect in controlling appetite, as well as benefits for reducing the symptoms of serotonin-deficient conditions such as depression and some forms of migraine.

Traditional ethnobotanical uses of garcinia include as a digestive and to treat bowel complaints: intestinal parasites and worms, as well as relieving constipation. It has also shown antimicrobial activity against E. coli, klebsiella pneumonia, pseudomonas, golden staph and HIV.

In Ayurvedic medicine, Garcinia’s high vitamin C content, along with its ability to improve cholesterol metabolism, makes it useful for heart conditions. Garcinia has been shown to decrease triglyceride and LDL levels and increase HDL levels. Its flavonoids have a strong lipid-lowering effect, improving liver function. Garcinia also increased serum levels of apolipoprotein A1: a lipoprotein that offers protection from atherosclerosis.

Brindleberry acts synergistically with L-carnitine to regulate fat metabolism, chromium and gymnema to improve blood glucose and metabolic syndrome in rats. In one study, garcinia was shown to reduce leptin levels, blood glucose, liver lipid accumulation, insulin and c-peptide when administered in high doses over nine weeks. It was also shown in diabetic mice to reduce serum insulin and leptin levels and improve glucose metabolism.

Garcinia has been shown to reduce excessive fluid accumulation and improve kidney function.

The crude extract or plant constituents have shown hypolipidaemic, antidiabetic, anti-inflammatory, anthelmintic, anticholinesterase and hepatoprotective activities in both in vitro and in vivo models.

While there has been some concern about liver toxicity, research supports the safety of the fruit supplements. Studies have shown garcinia to have hepatoprotective activity, so considering its long record of traditional medicine use, combined with the current research, there appears little risk.