Discover how the common ivy leaf can help with respiratory conditions 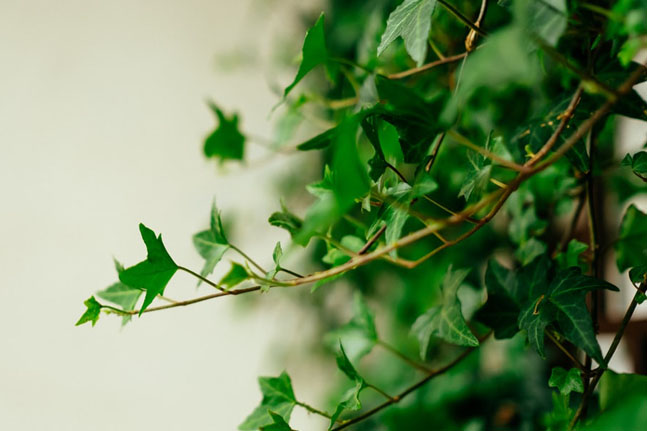 
Hedera helix — common or English ivy — is a species of evergreen flowering vine and a very familiar sight in gardens and waste spaces or climbing house walls and tree trunks. Native to Europe and western Asia, it can grow up to 30 metres high, clinging strongly with its aerial rootlets to vertical surfaces. It can also be grown as a groundcover.

Ivy prefers darker, non-reflective and rough surfaces with neutral pH for climbing, though it can survive in a wide range of soil pH. It avoids direct sunlight and likes to grow in shade. It flowers in late summer and autumn and the flowers are very rich in nectar, an important food source for bees and other insects.

The fruits are purple black and a food source for many birds — but poisonous to humans. Grown on buildings, ivy provides excellent insulation but in the long term is capable of damaging brickwork and hiding structural faults.

The use of ivy leaves has a long and colourful history. They form the poet’s crown as well as the wreath of Bacchus, as it was believed that binding the brow with ivy would prevent intoxication. The plant was sacred to the Druids and considered the feminine aspect (holly being the masculine).

In folk medicine, ivy-leaf poultices were applied externally to remedy swollen glands and chronic leg ulcers. They were also seen as a natural treatment for scabies, lice and sunburn.

The parts of ivy used medicinally are the leaves and berries, which contain saponins (antibacterial and secretolytic) and flavonoids (anti-inflammatory). There are many uses of ivy leaf and the leading ones are especially relevant to the winter season.

Ivy extracts are a component of many cough medicines as they are an excellent expectorant in cases of lung congestion. These are recognised by the European Commission E monographs as an expectorant in patients with respiratory diseases associated with a productive cough. They are also used to relieve bronchitis and other inflammatory or spasmodic lung conditions such as asthma.

There have been several studies conducted on children with asthma, with positive results. The first showed an improvement of respiratory function in children with chronic bronchial asthma. The second showed that ivy-leaf extract improved the lung function of children with mild uncontrolled asthma that were inhaling corticosteroid therapies. This research found that the ivy-leaf extract also worked as an effective adjuvant therapy to steroid medication, improving outcomes in the children.

In a study where mice were given ivy leaf, they were able to overcome influenza viral infections when the antiviral drug oseltamivir was largely ineffective, potentially due to the emergence of drug-resistant influenza viruses. The combination therapy decreased lung inflammation significantly.

Ivy leaf has broad-spectrum antimicrobial activity, being antiviral, antimycotic, antifungal, antiprotozoal and anthelmintic. It is also antioxidant and has major anti-inflammatory properties, inhibiting a major inflammatory pathway and therefore reducing the inflammatory interleukins responsible for many inflammatory reactions systemically.

Research has demonstrated that ivy leaf has measurable anticancer properties due largely to its ability to significantly reduce inflammation. It has shown efficacy against colon cancer and hepatocellular carcinoma and reduces chemotherapy resistance from paclitaxel in non-small-cell lung cancer.

Ivy leaf has shown broad-spectrum anti-viral activity, active against the influenza virus as well as to the enteroviruses causing hand, foot and mouth disease.

Ivy leaf has shown to be protective against gastric ulceration in rats, probably due to its powerful anti-inflammatory properties.

A standard dose of ivy-leaf tincture is 40–50 drops daily. The tea of the leaves can be drunk: one heaped teaspoonful to half a cup of boiling water and let steep for 10 minutes. Three cups per day may be drunk as an expectorant.

A poultice can also be made with ivy leaves and linseed meal at a ratio of 1:3 (ivy to linseed). Applied topically to the chest, this will relieve coughing and inflammation.

Although ivy leaf is considered to be generally free of side-effects (and it has been used successfully in children), it may cause skin irritation, rashes, itching or gastrointestinal upsets — in which case, discontinue use.

The leaves can cause severe contact dermatitis in some people. This type IV hypersensitivity occurs in people likely to also react to carrots as they have a similar chemical. Homœopathic Rhus tox has shown to be a good preventative for this reaction.

If taken in high doses, ivy leaf may cause nausea and vomiting. It should be avoided in pregnancy and lactation unless prescribed by a practitioner.