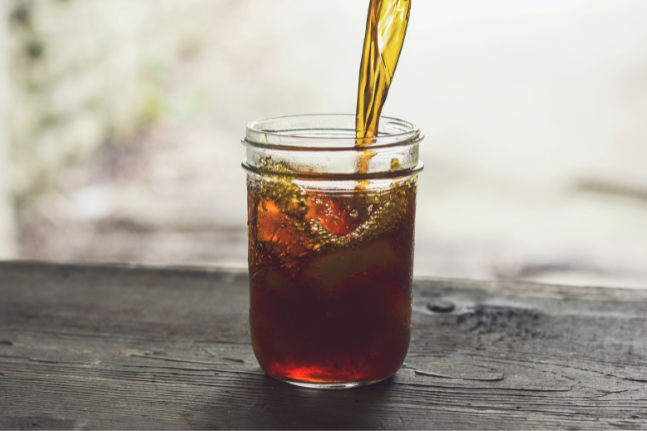 The healing power of kombucha

Kombucha is a fermented drink that has a rich heritage and many healing effects.

Kombucha (Medusamyces gisevii) is a tea mushroom or tea fungus (or Manchurian mushroom) and is fermented into a tea, commonly using either green black tea and then sweetened. The tea is made by fermenting sugared tea with a culture of bacteria and yeast called a SCOBY (standing for “symbiotic culture of bacteria and yeast”), commonly called a “mother” or “mushroom”. A variety of other fruit or flavourings are often added to improve the taste. The “mushroom” is actually a gelatinous biofilm produced by the SCOBY.

Kombucha is thought to have originated in Manchuria, China, possibly around 220 BCE, where it is traditionally drunk, or in Russia and Eastern Europe. In recent times the Russians were drinking it as early as 1900. The first known use of it by English speakers was in 1944. The word kombucha probably comes from the Japanese word that means “tea made from kelp”.

What is in kombucha?

The microbial populations of the SCOBY vary considerably; however, the yeast generally includes Saccharomyces cerevisiae as one of several species. The bacterial component is commonly Komagataeibacter xylinus (also known as Gluconacetobacter xylinus), which ferments the alcohols produced by the yeast into acids such as acetic acid, like vinegar. It has an alcohol content of less than 0.5 per cent. By producing acetic acid, the mixture limits the alcohol content. The alcohol content increases with longer fermentation times. The pH of kombucha is typically about 3.5.

The bacteria (mainly Acetobacter xylinum) also produce microbial cellulose, which forms the physical structure of the “mushroom”, the synthesis being promoted by caffeine and other xanthines. When fermented correctly, this floating cellulose network is powerful enough to inhibit the growth of potential bacterial pathogens.

Kombucha is a rich source of both prebiotic and probiotic compounds, partially dependent on its original substrates. When fermented, kombucha also contains enzymes, amino acids, polyphenols and other organic acids such as glucuronic acid, glycerol, lactic acid and usnic acid, as well as B vitamins, minerals and vitamin C. These nutrients vary between different mixtures. The fermentations that produce higher levels of lactic acid are the most beneficial.

How do you make it?

Kombucha is made by adding the kombucha culture to a premixed sugared tea. The sugar is important as it serves as a nutrient for the SCOBY and is responsible for the bacterial growth in the tea. Green tea or black tea are commonly used, but other teas such as rooibos have also been found to be beneficial.

Kombucha has also been fermented from a variety of other substrates such as Coca Cola, red and white wine, vinegar, whey, echinacea, lemon balm, mint, sage, extract of Jerusalem artichoke and many more. The kombucha made from Jerusalem artichoke extract contained considerably more prebiotics, improving the health benefits of the drink. Fermenting the tea on molasses instead of sugar also significantly improved its beneficial properties.

The tea can be made at home or commercially, and is made by dissolving sugar in filtered non-chlorinated hot water. The tea leaves are steeped in the hot sugared water which is then strained and cooled, and the SCOBY culture is added. It is then stored in a sterilised container with previously fermented kombucha tea to lower the pH, covered by a light fabric to keep insects out but let it breathe, and left to ferment for 10 to 14 days at room temperature, ideally between 18 and 26°C. The SCOBY forms on the top of the liquid, and after fermentation it is removed and stored with a small amount of the fermented tea. The remaining tea is strained and bottled for a secondary ferment for a few days or put into the fridge until consumed.

Kombucha has been shown to be prebiotic, probiotic, antioxidant and anti-inflammatory, with some of the most effective antioxidant activity when it is made from green tea. While the majority of studies have been done on animals (mainly rats), and some on human cells, the results are looking promising. More clinical studies are urgently needed.

While still being debated, epidemiological research has indicated that kombucha may help prevent several common chronic diseases such as type-2 diabetes or liver and kidney toxicity, and support the cardiovascular system. The pre- and probiotics have the potential to improve digestive and glandular activity.

Preparations of kombucha were made from black tea and oak leaves and showed significant anti-inflammatory and antioxidant activity, decreasing the pro-inflammatory cytokines interleukin 6(IL-6) and tumour necrosis factor alpha (TNFα).

Kombucha has been shown to reduce cholesterol levels and blood pressure. With its anti-inflammatory and antioxidant effects, it is potentially a useful beverage for cardiovascular health.

Kombucha can cause acidosis in some people, and is not recommended for people with immune disorders, pregnant women or young children. However it is generally not considered harmful.