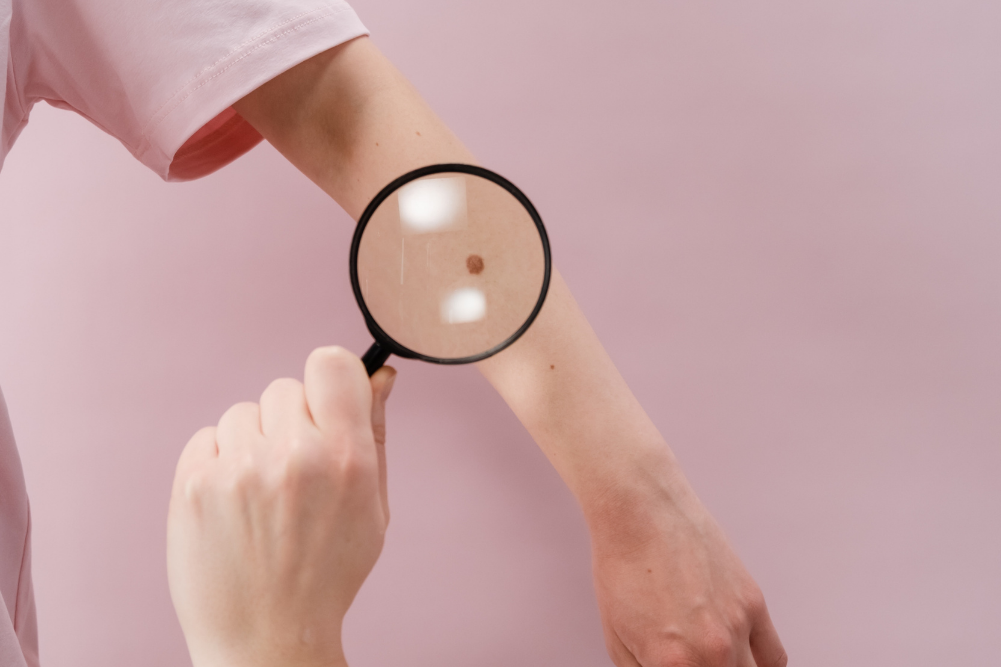 A lovely young woman came to my clinic with a medically diagnosed basal cell carcinoma (BCC) on her face. These types of skin cancers are not nearly as virulent as melanomas and usually do not spread beyond the immediate area, and often, if they grow, they do so very slowly. Her doctor suggested it be cut out, but she was concerned this would leave a noticeable scar on her face, so she was looking to see if there were any alternatives to treating it — hoping to try and avoid the surgical procedure.

There has been some research in recent years studying herbal and nutritional medicines for reducing or removing these mild cancers, although this may take some considerable period of time before being successful and needs to be monitored regularly.

There is some debate about the effect on sun on instigating BCCs, as there are multiple factors that can increase susceptibility, such as low antioxidants and environmental exposure to a variety of compounds. Excess sunlight is immunosuppressive and generates increased oxidation and DNA damage. Some prescribed medications can also exacerbate this effect, such as statin drugs and some anti-inflammatories.

However, discussing sun protection is always important in skin cancer. She used to go in the sun a lot as a teenager, but these days generally avoided it, especially during the middle of the day. The research does show that commercial sunscreens are not as effective protection against BCCs as against other skin cancers.

I suggested that she exercise early in the morning or late afternoon when sun damage is much less likely, and to do so without sunscreens or sunglasses. If she is exposed to the sun during the day, I suggested she should wear loose clothing, use a zinc-based rather than titanium antioxidant herb cream formula for sun protection, to always wear a lovely but protective hat. The ideal sunscreen needs to protect against both UVA and UVB radiation, and should as contain natural antioxidant ingredients that will stimulate DNA repair, as well as being safe and stable.

Skin damage resulting in various cancers is largely a process of the sun causing oxidative damage, so antioxidants are a critical part of the recommendations.

There is always the dilemma about having enough sun exposure to maintain adequate vitamin D levels but not so much that the skin is damaged — and vitamin D is one of the main protective nutrients for skin cancer protection. Some sun protection creams can also reduce the body’s ability to absorb vitamin D, which needs to be considered when recommending them. The patient’s vitamin D level was measured at 65, which from a health perspective is too low (medical normal is between 50 and 140) as the level for optimal health is considered to be about 100. It is also important to take vitamin K2 with vitamin D to prevent toxicity, often manifesting as over-calcification. I therefore prescribed a vitamin D3 plus K2 supplement to increase her levels.

We found significant digestive problems that needed improvement before the skin treatment was likely to be successful. If nutrients are being prescribed the digestive system has to be functioning optimally as, if supplements are to be effective, they have to be digested and metabolised effectively. Interestingly, the gut, brain and skin have a common embryonic origin, so these systems are interactive and all need to be healthy for optimal results.

Skin damage resulting in various cancers is largely a process of the sun causing oxidative damage, so antioxidants are a critical part of the recommendations. I recommended vitamin E twice a day, which is a higher dose than normal, along with up to 4gm of vitamin C per day, organic selenium, zinc and fish oil.

Herbally I encouraged her to drink organic green tea frequently and to take Silybum marianum (St Mary’s thistle) and curcumin (turmeric) daily. Synergistic with these herbs are quercetin, grapeseed extract and resveratrol, so supplements of these polyphenols were added as well.

To improve digestive function we checked her diet and suggested she avoid wheat, dairy and sugar and to focus on organically grown foods. She had an extensive history of antibiotic prescriptions, and this was considered a major factor in her digestive problems. I recommended organic coconut kefir for the regular ingestion of probiotics, and encouraged a selection of prebiotic foods to help feed the probiotic foods. I recommended a probiotic formula lactoferrin plus SB as well, as this probiotic is important in regulating microbiome damage from antibiotics. To assist with protein digestion and reduce inflammation I also recommended a specific protein-digesting enzyme at the end of each main meal.

As well as these recommendations, I made up a herbal cream for her to apply frequently. This contained the herbs bloodroot, calendula, celandine and turmeric along with iodine, selenium and zinc drops mixed in a vitamin E base. Topical applications can speed the rate of healing significantly as they target the specific area more effectively.

Over the next several months, her digestion improved, as did her overall feeling of wellness, but the BCC was persistent and showed little sign of change. So we adjusted the program, increasing the antioxidant doses and adding in lutein and zeaxanthin as well. While it was still very slow going, gradually the BCC started to shrink. She is still continuing with this program as she is still very motivated to avoid surgery if she can. Her GP is monitoring her progress, and while he would have preferred to remove the BCC, he is happy there is some progress and will continue to monitor her as well.