Learn the art of mastication from a "chew guru" 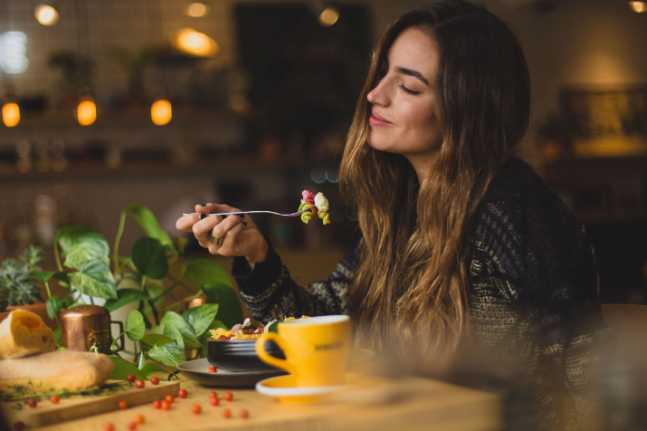 
Chewing is a primitive function of the brain; one that informs the body it is experiencing self-preservation. When eating, your survival instincts can be switched off temporarily and the body can relax. On a physical level, mastication releases the flavours and chemicals of food and mixes it with saliva so the body can create the appropriate digestive enzymes. It also opens up a channel of communication with the nervous system by sending signals to the brain as to what kind of food is on its way, as well as how much.

“Nature will castigate those that don’t masticate” was the rather extreme catchcry of American dietician and nutrition nut Horace Fletcher. He believed every mouthful should be chewed at least 100 times. It was a belief that earned him the title of The Great Masticator and probably a jaw the size of Roger Ramjet’s. Fletcher even chewed liquid.

There’s a saying in Chinese medicine that you should chew your liquids and drink your foods. Fletcher became obsessed with this notion after being rejected for health insurance. He was a gargantuan man at the time, weighing more than 135kg. Climbing stairs was akin to strapping on an oxygen mask and scaling Everest for the self-taught nutritionist.

“Whenever we chew unconsciously or swallow chunky food, the nervous system gets stressed, which in turn unbalances the lymphatic and blood systems. Eating hurriedly completely shuts down the body’s communication pathways to the psychic and intuitive realms.”

Desperate to shed his folds, Fletcher devised a diet plan that concentrated not so much on the food he ate but more on the way he consumed it. He vowed to never swallow his food until it was mush. More chewing meant he savoured his food and felt fuller from less. He soon lost his gut and regained his vitality and in the process gave birth to Fletcherism.

Between 1895 and 1919, Fletcher travelled the world and influenced the eating habits of many, including author Mark Twain and oil magnate John D Rockefeller. Chewing societies belched into existence across North America, their members gathering to Fletcherise. Fletcher gave lectures where he regurgitated his theory on how prolonged chewing negated overeating.

Studies conducted at China’s Harbin Medical University support this idea. Scientists there have concluded that increased chewing stimulates the presence of ghrelin, a hormone that regulates appetite — although this doesn’t necessarily equate to weight loss. Fletcher also believed that more prolonged chewing led to better systemic and dental health as well as increased strength and fitness. To prove the latter, he challenged a group of varsity athletes at Yale University to a series of fitness challenges. He beat them in deep knee bends and lifted more weight with his calves than boys 40 years his junior.

Fletcher’s claim that copious chewing increases strength is a dubious one; he was naturally a strong man. But Fletcher was tapping into something. Perhaps his physicality improved so drastically because of the psychological impacts of his conscious chewing.

Kinesiologist and naturopath Brian Schaefer runs workshops about chewing consciously. He believes the physical act of mastication has intimate links with opening pathways to higher levels of communication, namely the psychic and intuitive realms.

“Everything in the universe is a level of communication,” says Schaefer. “Whenever we chew unconsciously or swallow chunky food, the nervous system gets stressed, which in turn imbalances the lymphatic and blood systems. Eating hurriedly completely shuts down the body’s communication pathways to the psychic and intuitive realms.”

I started chewing consciously because I wasn’t digesting life and my body kept giving me clues in the form of chronic reflux. How I was relating to food was how I was relating to life: I was onto the next mouthful before properly tasting or digesting what I was currently chewing, blighted by an urgency to get somewhere, succeed at or achieve something, or to establish an identity.

When my reflux reached volcanic proportions, I booked in for an endoscopy. The results changed my life. I had a swollen lower oesophagus and lacerated upper stomach. While there were several contributing factors, the way I was — or rather wasn’t — chewing was a major one.

As important as the act of chewing itself is the time taken to pause between mouthfuls. It’s an entryway into a momentarily timeless and serene space, a portal into an internal world where it’s possible to discern how the stomach is receiving the food, and whether it’s in alignment with what the body actually needs.

In my eagerness to swallow and consume evermore, I was overlooking something quite magical. Every hurried mouthful was a missed opportunity to tune in with where I was at both physically and emotionally. As important as the act of chewing itself is the time taken to pause between mouthfuls. It’s akin to pausing at the top of the breath. It’s an entryway into a momentarily timeless and serene space, a portal into an internal world where it’s possible to discern how the stomach is receiving the food and whether it’s in alignment with what the body actually needs.

Slowing down when chewing takes the focus off external distractions. It taps into an internal emptiness, stillness and silence. Manic munching is perhaps a way of avoiding these internal realms because sitting in emptiness can be frightening and overwhelming. What are we afraid of confronting if we allow ourselves to fall into our inner emptiness?

Conscious chewing has exposed a fear of lack within me. The first time I tried Fletcherising it was virtually impossible. Resisting the urge to swallow and pushing on past 50, 60, 70 chews, and beyond, brought up unexpected emotions that lingered below the surface. Suppressing the need to swallow caused deeply embedded psychological facets of my personality to rise. Dormant cellular memories were activated: fears of starvation and of being afraid where my next meal was coming from rose to the forefront of my consciousness. They seemed like recollections from another time, ones that had been passed down my ancestral line.

Just two generations ago, people like my grandparents were forced to ration their food in World War II. My grandmother survived two world wars and developed a skill of rationing food. It’s not something she does consciously any more but the mindset of lack and that food isn’t readily abundant still pervades her – even though her reality reflects otherwise. My mother grew up with a diluted form of this psychology and it’s been subtly passed on to me, disguised within the cellular makeup of my being.

Falling into the emptiness of myself via conscious chewing has highlighted this lack mentality and how it’s played out in other areas of my life, particularly in a financial sense. It has also explained why I used to leave the house with my pockets stuffed with food.

Am I really tapping into my grandmother’s wartime rationing worries? Schaefer thinks it’s possible and so does science. Renowned cell biologist Bruce Lipton believes that genes are physical memories of an organism’s learned experiences. Since we inherit our parents’ genes, it stands to reason that we also take on some of their memories.

Slowing down when chewing takes the focus off external distractions. It taps into an internal emptiness, stillness and silence.

“You first manifested as an egg inside your mother’s ovary when she was a foetus inside your grandmother,” explains Schaefer. “This is the first time your cells started to appear. There are nine months of your mother’s experiences and stresses imprinted onto the egg during her pregnancy. Add to that the energetic signature of your grandmother and father — energetic signatures comprised of personality traits, ingrained beliefs and behavioural patterns passed down through generations. All this affects who you are and how familial imprints play out in your life.”

This is where conscious chewing has been of great benefit to me. Focusing on each and every chew has allowed me — after a while of practising — to identify and then begin to transcend the existing drives, impulses and urges that have been imprinted onto me during the birth process. By chewing consciously, I’m creating a space to intimately connect with who I am outside of these imprints. I’m able to start disassociating from familial blueprints that no longer serve me. Rationing food was a survival mechanism that served my grandmother well. And, while I need to be conscious about gluttony and waste, rationing food isn’t necessary in my life today. Neither is my lack mentality.

You are what you think while you eat

Schaefer focuses more on what’s coming in while he eats rather than what’s coming up and out. “Chewing consciously enables us to be mindful of the way inspirations come into us through the heartbeat, and how intuition is received through the in-breath. You’ll be more connected to yourself and to your future if you chew with the heart and breath in mind.”

Whatever your state of mind before eating, chewing will exacerbate it. If eating while worried about financial lack, for example, then you’ll be more deeply entrenched in that reality by the end of the meal.

Whatever your state of mind before eating, chewing will exacerbate it. If eating while worried about financial lack, for example, then you’ll be more deeply entrenched in that reality by the end of the meal.

“Conscious chewing is an expression of attaining a state; it highlights a continuing experience of your consciousness on Earth,” asserts Schaefer. “You must be in the right frame of mind to chew. If you’re doing mental gymnastics while chewing then you’re simply perpetuating existing paradigms. Because of this, food can only shift paradigms in relation to what you know, rather than evolve you into what you don’t know.

“Chewing consciously enables you to experience yourself being instrumental to life, being the instrument through which life itself is being experienced.”

Eating as a ritual

Conscious chewing is such a powerful practice because it imbues an abstract intention with a physical and concrete practice that you do by default of being and wanting to stay alive.

We may be a little way off integrating the ritual of chewing into the public space, but imagine if a new law of chewing came to pass. Restaurants would be silent places of culinary contemplation. Both the US and the UK actually have silent restaurants. Nicholas Nauman, managing chef at Eat in Brooklyn, USA, got the idea for his silent eatery from time spent in an Indian monastery. He believes eating in silence “is a way to understand intention and experience in eating, which is as profound a human activity as there is”.

In Australia, artist Honi Ryan won an award at the 2015 Sydney Fringe Festival for her silent dinner party. She believes eating this way “propels us into the moment and offers a chance to connect in real space amidst a world mediated by words and images, at once highlighting cultural differences and revealing a base humanity”.

With conscious chewing you have several hundred opportunities each day to tinker with your reality, to love the things you find negative about yourself and to really tune into the depth of your humanity. Each and every chew opens a doorway of possibility into realms where you are the sovereign keeper of your reality.