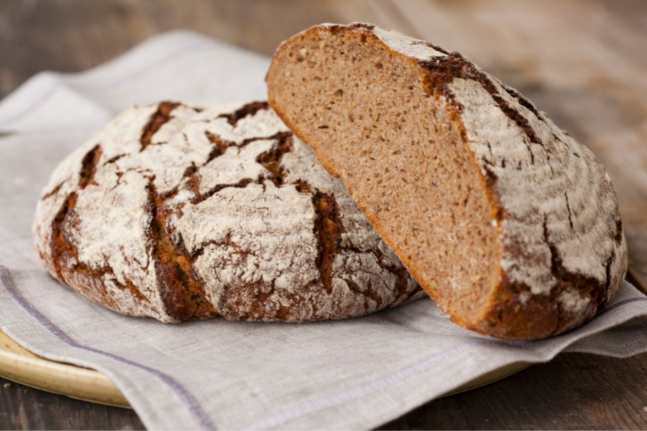 The roots of traditional rye bread

Rustic rye bread is nourished with knowledge, tradition and time.

Rye is a grain that is similar to wheat but darker in colour, and has an earthier taste with a denser texture. This grain has a high tolerance for growing in cold climates and originally grew hidden in wheat fields as a common weed.

When ground from a grain into flour to make bread, rye boasts many health benefits. Rye bread is rich in fibre, contains less gluten than white bread (which makes it better for people sensitive to gluten) and contains an abundance of nutrients. These vitamins and minerals include magnesium, iron, phosphorous, zinc and potassium, as well as antioxidants.

Although rye bread is widely consumed in Europe, the rustic bread is gaining traction in Australia due to its health benefits and delicious flavour.

“Rye bread, to me, is a 100 per cent rye, wholegrain, dark, dense and heavy bread with a moist inside (because of the way we cook it),” reveals Ket Baker founder and owner, Miek Paulus. “It is delicious with savoury toppings. Butter, smashed avo and poached eggs just got a fourth dimension of enjoyment! It’s a bread where you eat only thin slices of it and that keeps for over two weeks if stored well,” continues Miek. Belgian-born and French-trained, the artisan baker lives on Victoria’s Bellarine Peninsula with her family, where she has been making 100 per cent sourdough croissants, breads and small-batch pastries from her rustic, sustainable shed bakery since 2016. Lauded as “an artisan bakery with a big heart”, Miek is passionate about making delicious and nutritious bread “that you’ll love and that will love you (and your guts) back”.

“It contains plenty of vitamins B3, B9, K and E. It also contains a high amount of fibre, which offsets the carbohydrates, so it is actually a good keto-friendly bread.”

According to Miek, rye bread is a nutritional powerhouse. “One-hundred per cent rye and full bran is a must to get all the health benefits,” she reveals. “It contains plenty of vitamins B3, B9, K and E. It also contains a high amount of fibre, which offsets the carbohydrates, so it is actually a good keto-friendly bread without the need for any additives and chemicals. Nor does it cost a fortune.”

Rye bread that is fermented, otherwise known as sourdough, is another way to increase its health benefits. “Any bread is always best eaten naturally fermented — as sourdough — and this is no different to rye,” continues Miek. “Find yourself a natural fermented one that improves digestibility, decreases phytic acid (which is usually more the ‘bad guy’ than gluten) and unlocks many more nutrients, compared to the yeasted brother. Studies have shown that rye wholebran improves bowel function, supports gut lining, helps to balance the gut microbiome, has prebiotic support and lowers the risk of colon cancer,” she adds.
Miek started baking rye bread due to customer demand and backs its health-promoting properties. “I strongly believe in the health benefits of bread that come from traditional, knowledgeable bakers,” she shares. “Rye is such an amazing powerhouse; it would be silly for me not to! Bread is a cornerstone of our diet and can give us so much nutritional value.”

For high-quality rye bread, preparation is key. “I pre-cook some of my flour, which results in a more stable structure but also in a ‘wetter’ loaf. This makes it much easier and nicer to eat — it’s a bit like a cake!” says Miek. “You bake it for up to two hours at a lower temperature (190°C).” Setting time is another important element to take into account, with patience being the key. “A rye loaf takes about 24 hours to set. I sometimes sell my rye after 12 hours, meaning it is still setting. We can see that happening when we cut the rye and the crumb sticks a bit to the knife, or when the crumb gets damaged during cutting (taking into account the knife is a sharp bread knife),” reveals Miek. She uses wholebran flour and bakes rye bread without yeast, which results in a 100 per cent sourdough loaf.

Pane di Matteo founder Matt Santoro, who bakes rye bread at his boutique artisan bakery and pasticceria in Geelong, believes the health benefits of rye bread speak volumes. Specialising in handcrafted sourdough and Italian pastries, Matt learned the ropes from his father in their family wholesale bakery for more than a decade before sharing his passion with the public when he opened Pane di Matteo in 2014.

“One of the main benefits is that it's great for your digestive system. People who find it hard to digest wheat bread prefer the rye as they find it doesn't upset their stomach.”

“I started baking rye bread back in 2002. It was a no-brainer to produce rye when I opened Pane di Matteo because I knew it was a delicious loaf of bread with lots of health benefits,” recalls Matt. “One of the main benefits is that it’s great for your digestive system. Most of the feedback we receive about our rye is that it’s easy to digest. People who find it hard to digest wheat bread prefer the rye as they find it doesn’t upset their stomach.”

Similar to Ket Baker’s rye bread, one of the key nourishing elements of Pane di Matteo’s rye bread is that it is naturally leavened (fermented). “We add salt, water and sourdough leaven to it,” Matt explains. “Once it’s mixed into a dough, we leave it to ferment in a bucket for a few hours before weighing and moulding it into shape. We then place it into a banneton basket and let it rise slowly overnight. The next morning it gets loaded onto the brick floor of the oven and baked.”

Honouring a traditional means of baking bread is what results in a high-quality product, according to Matt. “I think our rye bread is special because it is naturally leavened and baked on the brick floor,” he says. “Most artisan bakers would do the same thing. It’s the best way to make proper rye and it comes out with a nice crunchy crust.”

How to store rye bread

“Our rye loaf stays good for more than two weeks,” reveals Miek. “You need to keep it in the paper bag, in a sealed plastic bag, so that it doesn’t dry out. It’s best to eat a few slices daily so the air in the plastic bag doesn’t make the rye stale and mouldy,” she continues. Rye bread’s flavour also develops with time. “After 10 days it actually develops a different flavour palate; it gets more complex, subtle and a bit sweeter. It is totally worth the wait. For that reason I do not recommend putting it in the freezer because that will stop this beautiful process of flavour development,” advises Miek.

Even though rye bread is dark in colour, this doesn’t mean it is necessarily wholegrain. Rye bread can be made with a variety of different flour blends, such as light, medium or dark-rye flour combined with a flour that has more protein, such as wheat (which helps it to rise). If you’re unsure whether a rye loaf is also wholegrain, check the bread’s label or ask the baker from whom you’ve purchased it. 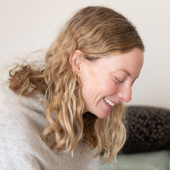