5 healthy whole grains to add to your weekly food plan 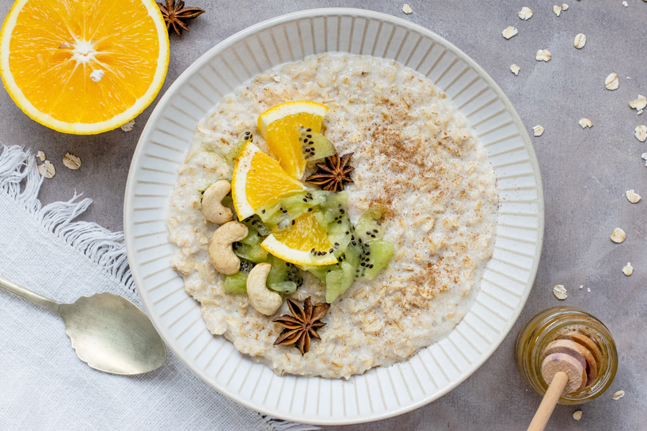 
Add some crunch to yoghurt with barley; make salads more filling with freekeh; and enjoy the nutty flavour of buckwheat in pancakes. The diversity of grains means there’s a good chance you’ll find one that’s perfect for every meal, snack and dessert.

To take full advantage of all the grains on offer, have a closer look in the health-food aisle, where you’ll find an array of interesting grains, from ancient to modern, exotic to staple, gluten-free to high-fibre.

Felicity Curtain, Nutrition Manager of the Grains & Legumes Nutrition Council and Accredited Practising Dietitian, suggests setting yourself a challenge to try a different grain each month, and to stay inspired with new recipes and food ideas.

People with a gluten intolerance or coeliac disease don’t need to miss out on the wonders of grains, either, as there are many gluten-free varieties on the market, such as rice, quinoa, buckwheat, corn and amaranth.

The Australian Dietary Guidelines recommend that adults aim for four to six serves of grains a day.

“Grains, but particularly whole grains, are really packed with nutrients that are good for our health,” says Curtain. She explains that they’ve got more than 26 nutrients naturally inside them, including carbohydrates, fibre, protein, vitamins, minerals and phytonutrients.

“I guess the best part is that grains are a really easily accessible food. They’re something we can find in every supermarket, we can keep them on our shelves, we probably all have some form of grain every day. They’re something really simple to incorporate [in our diets] and there’s a big benefit to be had from eating our grains.”

Just remember that the wholegrain varieties will give you the best health benefits. “The more refined and processed grains are the lower their nutritional value,” says Curtain. Choose multigrain bread and brown rice for meals and wholegrain crackers and popcorn for snacks.

Curtain says grains have both short- and long-term health benefits “We know people who have grains are less likely to be overweight, but grains are also protective against some of our nation’s biggest killers — things like cardiovascular disease, type 2 diabetes and even some cancers.”

A 2017 study by the World Cancer Research Fund International/American Institute for Cancer Research, found that consuming wholegrains decreases the risk of bowel cancer. According to the report, the dietary fibre content in wholegrains may protect against the cancer in several ways. Plus, minerals and vitamins largely found in the bran and germ of grains are thought to have anti-carcinogenic properties.

The Australian Dietary Guidelines recommend that adults aim for four to six serves of grains a day. Examples of a serve are a slice of bread; half a cup of cooked rice; pasta; noodles; quinoa; porridge; or a quarter of a cup of muesli.

There are many grains out there but here are a few that you might like to add to your weekly food plan.

BARLEYmax is a new health grain, developed and bred naturally by the CSIRO. Compared to regular barley, it has enhanced nutritional benefits. It’s a high-fibre wholegrain with four times the level of resistant starch of most grains and is low GI. It’s available in breakfast cereals and bakery products and also as flakes, flour and kibble to use in cooking.

Buckwheat is available as seeds, groats and flour. “It’s a really versatile grain that we can use in lots of different ways,” says Curtain. Buckwheat pancakes are a popular choice at cafes, while the flour is also used in Japanese cuisine for soba noodles and the groats can be used to make porridge.

Freekeh, a variety of wheat, is an ancient grain, which means it is unchanged over the past century or so. It looks and cooks similar to rice. “It comes out quite chewy and nutty and is really delicious and good for substantial salads,” says Curtain. “It’s harvested when it’s really young, which means it’s a little higher in protein, vitamins and minerals [compared to matured wheat],” she says.

Quinoa can be used for salads and soups and ground into flour. It’s a grain suitable for people with a gluten intolerance and also a valuable grain for vegetarians, as it’s a rare plant food that contains all the essential amino acids, making it a complete protein. “Quinoa gives you all those amino acids that are really important for our muscles, our cells and our whole body,” says Curtain.

From jasmine rice, used with Asian stir-fries, to arborio for Italian risottos and wild rice, which is native to North America, this grain has been a popular food around the world for centuries. It can be processed into food products such as rice flour (often used for shortbread), rice-bran oil (good for stir-frying and deep-frying), puffed rice (found in breakfast cereals) and sake (a Japanese rice wine). “It’s always best to have the wholegrain option, so choosing brown rice over white rice is going to give you the broad spectrum of nutrition,” says Curtain.

Case study: a year in the life of an oat grain

To really appreciate what grains are all about it will help to follow one from paddock to plate. From a tiny seed in the soil to creamy porridge in a bowl, an oat grain has an interesting life. It travels through lush paddocks to harvesting machines, before being stored in silos and ending up in your tummy.

About 200km north-west of Melbourne lies Natte Yallock, where five generations of the Cain family have farmed oats on Fairview Farm. James Cain first began growing oats on the property in the late 1800s. Now, the land is farmed by his great-grandson, Maurice Cain, and Maurice’s son, Matt. The oats are sold under the brand name Dad’s Oats, founded by Matt’s siblings, Alicia and Pete. Their mum, Ruth, is in charge of coming up with delicious recipes using oats.

The Cain family sows golden-coloured Echidna Oat seeds in April/May, when the soil is moist and warm. “We select weed-free paddocks with good fertility to maximise the crop yield and nutritional value of the output,” says Matt.

The seeds grow from May to December. During this time, a good winter and spring rainfall with lots of sunshine is ideal. As the seeds grow, the crop needs to be monitored and checked for nutrition. If you’re on a country drive, you may not be able to distinguish an oat paddock from other grains. “Oat plants look very similar to other crops in the early stages — much like green grass,” says Maurice. “However, as they develop, you see little ‘bells’ on top.”

Come December, it’s time to harvest. The oats should be fully dry by now, with no green visible. “The header (harvesting machine) is driven slowly through the paddock and blades along the front of the machine cut the stem, removing the top third of the plant that contains all the seed. This top section then travels through the machine via a series of augers and conveyers and is mechanically threshed out and blown with a fan to separate the oat grain from the plant stems and chaff,” says Matt. The whole process takes four weeks, on average. “Longer if the weather or machinery fails us,” he admits.

The oats are aerated to keep them cool and clean and are stored in sealed silos on the farm, before being processed in small batches. “The husk (outer shell attached to the oat) is not digestible by humans so must be removed from the oats before they can be used as food. A highly specialised dehulling machine lines the grains horizontally and strips the outer husk away without damaging the groat (the wholegrain oat),” says Alicia.

The groats can then be processed further. “Steel-cut oats are the groats, which have then been chopped into small pieces with a steel blade. Traditional rolled oats are the groats that have been rolled flat. Quick oats are rolled even thinner and finer so they cook quicker when making porridge,” she explains.

The final chapter for an oat grain is … the eating! They provide us with nutrients and deliciousness when we toast them for muesli, bake them for ANZAC biscuits and boil them for porridge.

“There are many creative ways you can use oats,” says Alicia. She suggests having porridge with butter or peanut butter, or Bircher muesli or fresh muesli with nuts, seeds, dried fruit and milk. The options don’t end in the breakfast realm, either; the groats can be cooked in a similar way to brown rice and used for salads and risottos.

Not only nutrient-rich, versatile, affordable and delicious, oats also have a long shelf life. Alicia says they can generally keep for 6–12 months. “Store in an airtight container (or keep within our resealable bags) in a cool, dry area. If you intend to keep the oats for a long time or live in a humid place, they can be kept in the fridge to extend shelf life.”

Whatever wholegrain you choose, you can rest assured it will be doing good things for you.