Grapefruit and its bittersweet effect 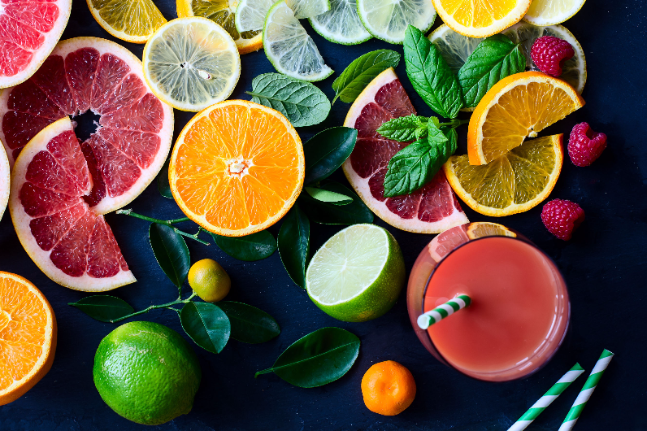 
A subtropical citrus fruit, grapefruit (Citrus x paradise) derives its name from its growing habit, growing in grape-like clusters on an evergreen tree. The flesh is segmented and acidic, varying in colour from red, white and pink with varying levels of sweetness (the red being the sweeter). The primary ancestor of the grapefruit was the Jamaican sweet orange, itself an ancient hybrid of Asian origin, bred with the Indonesian pomelo. Initially documented in 1750, it was one of the “seven wonders of Barbados”, and was originally a forbidden fruit and called a “shaddock”.

Grapefruit is a rich source of vitamin C, B vitamins, a range of minerals and pectin, along with the antioxidant lycopene. It is very low in fat, low in protein and low in carbohydrate with 138kJ per 100g. The sulphur-containing terpene, mercaptan, is largely responsible for the grapefruit’s taste and odour. The primary active ingredients are the flavonol glycosides such as naringin and the furanocoumarins.

The flavonoid content of grapefruit with its antibacterial and antioxidative properties was shown to have a gastro-protective activity against mucosal damage caused by alcohol and excessive stress.

Grapefruit has shown positive effects in protecting against neurodegenerative conditions — with naringin having significant antioxidative, anti-inflammatory and anti-apoptotic properties. In this research it was shown to improve the function of the blood–brain barrier by inhibiting neuroinflammation caused by the inflammatory cyotokine NFkB, and by reducing neurofibrillary tangle formation.

Naringin appears to be particularly effective in reducing neurodegeneration in Parkinson’s disease, both with its anti-inflammatory effects and in the prevention of dopaminergic degeneration in the brain.

Naringin has shown significant healing properties with diabetic foot ulcers, largely due to the regulation of anti-inflammatory mediators and by stimulating angiogenesis — the growth of new blood vessels to the area — thereby increasing healing.

Drugs called nucleoside reverse transcriptase inhibitors (NRTIs), such as AZT, are effective drugs given for treatment for HIV infections but also lead to metabolic side-effects, including liver reactions. Giving naringin (from grapefruit juice) reversed the metabolic complications by improving the oxidative stress and the liver dysfunction caused by these drugs.

No article on grapefruit would be complete without at least a mention of the beneficial properties of grapefruit seed extract.

Grapefruit seed extract is a major antibacterial, antiviral and antifungal agent, a substantial (in vitro) study showing it to be effective against more than 800 bacterial (both gram positive and gram negative) and viral strains, and a large number of single and multi-celled parasites. Grapefruit seed extract appears to disrupt the bacterial membrane and disperse the cytoplasmic contents, thereby destroying the pathogenic organisms, even at very low dilutions.

There have been many studies on the effect of grapefruit juice on drug interactions, showing both positive and negative effects, depending on the drug. The potential interaction is due to grapefruit juice’s ability to inhibit the CYP3A4 pathway in the liver, which is significantly involved in the metabolism of a wide range of pharmaceuticals. 100g of grapefruit contains enough naringin to inhibit this pathway and it can take up to 72 hours for the effect to be reversed. The result of this can be a potential increase in the drug’s toxicity.

Possible drug interactions have been shown to occur with immunosuppressants, benzodiazepines, blood pressure medication and some chemotherapeutic drugs. There is some debate surrounding the interactions with statins or with antiviral medication, as these combinations may also confer some benefits. Patients, however, should be wary of consuming grapefruit juice if they are prescribed any drug with a narrow therapeutic margin, or if the drug carries a risk of dose-dependent adverse effects, as the grapefruit juice may increase the dose. Always check with your doctor or health practitioner.