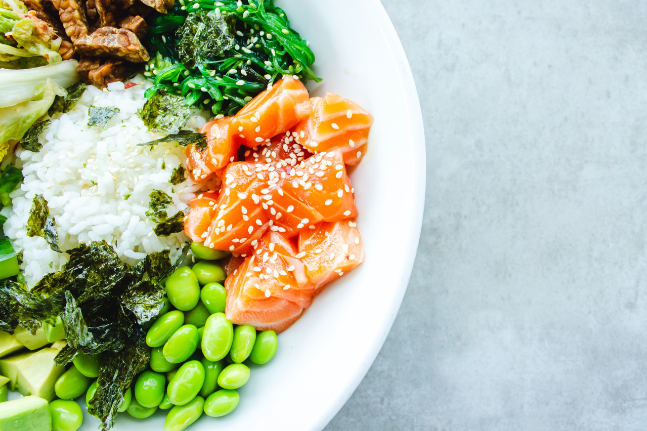 A middle-aged woman came to see me who had relocated to Australia with her husband several years ago from Japan. While living in Japan she had followed a traditional diet and lifestyle, but since living in Australia her food choices had changed.

The traditional Japanese diet consists largely of fish and seafood (being the major protein), a range of soy-based proteins, a wide variety of fruits and vegetables both raw and pickled, lots of soups, seaweeds and rice and wheat (often as a tempura batter for fried seafood and vegetables). As Japan is a fishing nation, the Japanese diet contains significantly more fish and seafood than other Asian countries, and the emphasis on food is that it is mainly fresh and seasonal. While in Japan she had also enjoyed excellent health, as did her family.

However, since coming to Australia, she had changed her diet significantly, and she was concerned that her health was deteriorating rapidly. While she still preferred Japanese food, she had difficulty eating this regularly and she had concerns about the freshness of the produce, particularly the seafood.

She had also developed a considerable liking for dairy products such as cheeses, which she included in her diet on a regular basis.
Her husband was a businessman and they ate out frequently in restaurants and also had takeaways two or three times a week. She was fond of foods like pizza.

When foods have never been a part of the traditional diet of a culture, its people do not develop the ability to utilise these foods and they can cause severe reactions.

The main symptoms she presented with were digestive upsets, gaining weight very quickly and lack of energy, and she was so horrified by a dry scaly skin condition that had developed all over her body, like an eczema or dermatitis, that she had been to various doctors and dermatologists, but the treatments they had recommended had only resulted in temporary relief. While she was increasingly anxious about her appearance, she was also becoming concerned about the toxicity of some of these treatments, particularly the side effects of the steroid medications she had been prescribed, which included weight gain and potential osteoporosis. She also had recurrent sinus problems and had difficulty breathing at times.

On questioning, there was no family history of inflammatory skin conditions (the genetic eczema–asthma atopy scenario) and she had never had this problem in Japan. We therefore discussed the possibility that the changes in her diet were potentially the problem. This had not been mentioned to her previously.

Until very recently dairy products were not a common food in Japan, certainly not in traditional diets, and this was the most obvious potential source of her problems. When foods have never been a part of the traditional diet of a culture, its people do not develop the ability to utilise these foods and they can cause severe reactions — symptoms consistent with an allergy or intolerance.

She had the classic symptoms of a dairy allergy or intolerance. The inability to digest dairy products often leads to symptoms of IBS-type digestive upsets: wind and bloating and diarrhoea (which can be severe), accompanied by various skin conditions, weight gain, headaches and often anxiety or depression.

The weight gain could also have been compounded by eating much less fresh seafood, contributing to a thyroid imbalance as well.
Eczema, a dry scaly inflammatory skin condition, is considered an issue with either the lack of or a greater need for the omega-3 essential fatty acids, commonly obtained from fish and seafood.

A diet more aligned with the Japanese diet was instigated which included eating fresh seafood more frequently, increasing vegetable intake and totally excluding all dairy products. We also substantially reduced the wheat component, removing bread and biscuits. As she still wished to be able to get takeaway food, traditional Japanese restaurants were suggested as the better option.

To improve her skin condition omega-3 fatty acids were recommended as supplements — a sustainable krill oil — along with a zinc formula to improve the metabolism of the fatty acids. Hemp oil to be used topically as a moisturiser was also recommended. To improve digestion, unpasteurised miso was included on a daily basis as this contains probiotics, along with brown basmati rice and prebiotic vegetables. Organic food was recommended for better nutrients. Until her digestive system was functioning correctly, digestive enzymes, particularly a protein digestive enzyme formula, was also recommended to be taken at the end of each meal.

The reintroduction of increased seafood would have also helped with any thyroid problems, which include lack of energy and weight gain.

While these were substantial changes to her current diet, she had had many years’ experience eating her cultural foods, so despite it being initially difficult to change back, she did so and enjoyed eating her traditional foods again. The benefits were enormous.

Three months later she was a different woman. She was feeling much healthier and much more like her old self. Her weight had stabilised, her skin had improved dramatically and had no signs of the eczema, her energy had improved and her digestive symptoms were a problem only occasionally when she relapsed from her dietary changes. She had also referred several of her Japanese friends to me who had similar conditions, and my answer was much the same (this was becoming repetitive); they all improved when going back to their traditional diets. An interesting exercise.