Discover the health benefits of the humble green bean 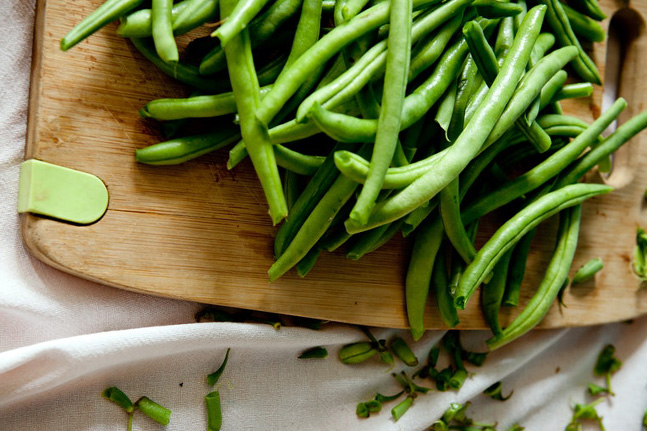 
Green beans (Phaseolus vulgaris) are native to the Americas, and possibly first domesticated in the Mesoamerican region (Mexico, Guatamala etc), then travelled south along with squash and maize – the ‘three sisters’ central to indigenous American Indian culture. With their high lysine component, green beans eaten with corn provided a more effective source of protein in the diet of indigenous people. Today beans are grown in every continent except Antarctica.

What we call green beans today are in fact, the edible, unripe, young fruit and protective pods of the common bean, and can be called French beans, string beans, snap beans amongst other names. Green beans are harvested and eaten in their protective pods before the seeds inside have fully matured. In the past, green beans contained a ‘string’ – a hard fibrous strand running the length of the pod that had to be removed before cooking. The first ‘stringless’ bean was bred in 1894 (in New York) by Calvin Keeney – called the ‘father of the stingless bean’. If left to mature and ripen, the seeds of the beans are often dried for long term storage, then cooked and eaten when required. There are over 130 varieties of green beans known today.

Green beans are classified into two major groups – dwarf (or bush) beans and climbing beans – the beans of which are very similar and are consumed in the same way – fresh, raw, cooked by steaming, boiling, stir-frying or in stews and casseroles. Green beans can be green or purple in colour, but the purple colouring changes to green on cooking. The leaves of green beans can also be eaten. The purple version of the common green bean has a higher phenolic content (even though it turns green on cooking) and therefore a greater anti-inflammatory effect.

Green beans are high in protein (two to three times higher than grains), amylose (starch) and dietary fibre. They are an excellent source of iron, potassium, molybdenum and the vitamins b1, b6 and folate, and vitamins A (carotenes) and C. They also contain high levels of a range of polyphenolic compounds, giving beans anti-oxidant, anti-diabetic, anti-obesity, anti-inflammatory and anti-carcinogenic properties.

Even something as common as green beans have multiple properties to improve human health.

Common bean consumption is associated with reduced cancer risk in human populations, the non-digestible fractions inhibiting carcinogenesis in animal models and inducing cell cycle arrest and apoptosis in cell cultures. The anti-carcinogenic activity of beans is related to the presence of the starches and dietary fibre, as well as the phenolic compounds, phytic acid and protease inhibitors. Eating beans regularly has shown a reduction in the risk of colon cancer, partly by inhibiting mutagenic compounds such as nitrosamines, hydrocarbons and mycotoxins.

Consumption of beans in the diet is beneficial, not only for healthy individuals but also for those with a tendency for metabolic syndrome and diabetes. Beans have been shown to lower total cholesterol and LDL cholesterol (the so called ‘bad’ cholesterol), the resistant starch and dietary fibre content being mainly responsible.

Resistant starch and dietary fibre compounds in beans have been shown to manage metabolic syndrome by delaying the absorption and metabolism of glucose, improving fat utilisation, and controlling appetite by increasing feelings of satiety.

The fibre components of beans are fermented by bacteria in the large intestine resulting in the formation of short chain fatty acids. These alter metabolic pathways and reduce serum cholesterol, partly by regulating bile and steroid intestinal absorption.

The consumption of beans has a protective role in the development of Type-2 diabetes. The dietary fibre components of beans prevents elevated glucose levels, resulting in reduced insulin and glycaemic responses – giving beans a very low glycaemic index of 20 (for comparison – potatoes are 85 and wholemeal bread 77). Consumption of low glycaemic foods is recognised as useful in the reduction of obesity and diabetes. An Australian study showed that a fall of 10 per cent in the glycaemic index of a diet, resulted in a 30 per cent increase in insulin sensitivity.

Several clinical studies have shown regular consumption of beans lowers the risk of cardiovascular disease. Consuming beans more than 4 times per week decreased cardiovascular risk by 22 per cent compared to those eating beans only once a week.

A most unexpected use for green bean leaves is to trap bedbugs – a common practice in Europe. Apparently microscopic hairs on the leaves trap the insects.

Green beans are a common vegetable yet research shows that eating them frequently confers considerable health benefits, so eating them in some from, either raw or cooked 4 times a week is ideal. While they do contain some anti-nutritive factors such as protease inhibitors, tannins and phytic acid (which confer different benefits), overall they are an excellent food.