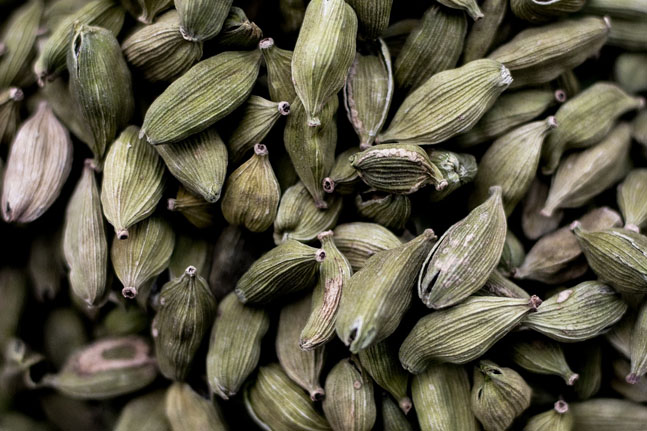 
Cardamom, the “queen of spices”, is the world’s third most expensive spice after saffron and vanilla. The first records of its use date back to ancient Sri Lanka, where even today it is an important component of Ayurvedic medicine.

Today the largest producer is Guatemala with India second. Arab countries consume more than half of worldwide production of cardamom, using it mainly for flavouring coffee.

There are two types: Elettaria cardamomum, green or true cardamom (the best quality); and black cardamom, which is a different plant (Amomum subulatum), although both are in the ginger family. These two types of cardamom were distinguished in the 4th century BCE by Theophrastus, the Greek father of botany.

Both types of cardamom are used worldwide as flavourings, as cooking spices and as medicines but Elettaria cardamomum is more important. It is used in foods, as a medicine and is also smoked. Commonly used as a flavouring in foods and in coffee and tea, as well as in bitters and gin, it can also be used as a perfume.

Green cardamom has a strong, unique taste, is intensely aromatic and resinous, whereas black cardamom is more smoky and cool.

Green cardamom is one of the most expensive spices in the world according to weight, but little is needed for flavor or fragrance. It is best stored whole but, for the best flavour, the pods need to be removed when it is ground.

Cardamom’s active ingredients exhibit a variety of metabolic activities including reducing spasms and cramps, lowering blood pressure, vasodilation, relaxing heart muscle, diuretic and sedative activities. It also has analgesic, anti-inflammatory, antimicrobial and antispasmodic activities. Many of these activities are related to its ability to regulate cholergineric and calcium antagonist activities.

Cardamom aids digestion and improves the health of the teeth and gums. Being carminative, it improves digestion and relieves wind. Research shows that cardamom exhibits both gut excitatory and inhibitory effects through cholinergic and calcium channels, so it can increase or decrease digestive enzyme secretion depending on circumstances. This supports its traditional use for constipation, diarrhoea and colic.

Cardamom works through the parasympathetic nervous system in the gut and plays an important physiological role in peristalsis — which could also explain its traditional uses for dyspepsia and constipation. Its relaxant/antispasmodic effects however also play a role in gut overactivity through the regulation of calcium channels.

In mice, cardamom has also been shown to reduce the risk of stomach tumour incidence while significantly improving antioxidant enzymes such as glutathione, indicating a possible use as a chemo-preventative spice against stomach cancer.

Cardamom is also used as a flavouring in chewing gum where it functions as a breath freshener.

Cardamom also has been shown to promote the uptake of glucose in muscle cells and adipocytes, making it potentially useful for the treatment of metabolic syndrome and diabetes. It is nearly as powerful as insulin medication as it inhibits the proliferation of insulin-resistant cells.

Cardamom is used to treat colds, bronchitis, fevers and inflammatory conditions of the oropharynx.

Cardamom seeds are high in anti-inflammatory compounds such as cardamonin, which regulates the protein complex that controls DNA transcription and plays a crucial role in regulating immune responses to infection (NFкB), as well as inhibiting inflammation through COX-2 pathways. This activity also shows promise against neoplastic processes such as multiple myeloma.

Cardamonin has been shown to inhibit the herpes family viruses, especially Epstein-Barr (glandular fever) virus, and, by extension, reduces the risk of Hodgkin’s lymphoma. It also helps inhibit the dengue fever virus.

In studies conducted in agar solutions, cardamonin was antifungal against the athlete’s foot fungus specifically. This research showed that cardamom works against this particular type of fungus but was not as useful against other fungi like Candida albicans or Saccharomyces cerevisiae.

Eye drops containing cardamom were found to improve symptoms of cataract refractive errors and to reduce symptoms of eye infections.

Green cardamom has been shown to significantly reduce total blood cholesterol, triglycerides and LDLs while increasing HDL concentrations. Using the powder and the oil, the cholesterol content of cardiac muscle (in rats) was lowered by 31 per cent with LDL lowering by 44 per cent. Liver triglycerides were also lowered by 33 per cent, while the ascorbic acid level increased, indicating a potential cardioprotective effect. Its sedative and diuretic effects can also assist in lowering stress-related high blood pressure.

Cardamonin can function as a vasodilator by inhibiting calcium entry into the cell, thus relaxing the blood vessel walls, another factor in reducing high blood pressure.

Cardamom has been studied for its sedative/relaxant effect in conditions such as headaches and epilepsy.

There are several clinical trials underway in various parts of the world to determine the medicinal properties of cardamom more specifically.

Cardamom has been shown to be safe in high doses: up to 10gm/kg has been tested without any detrimental effects.