Find out why imagining is good for you 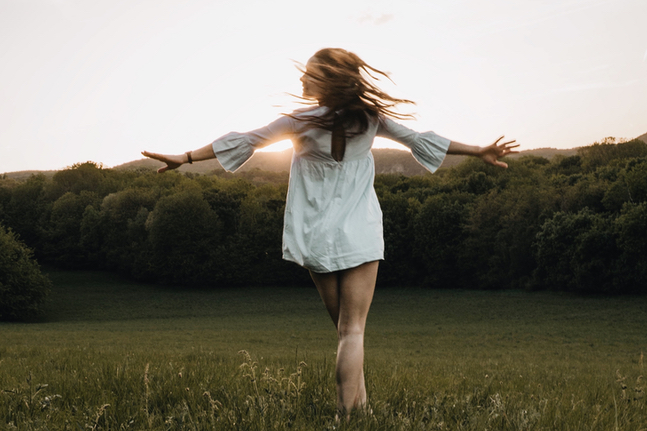 A focused imagination can help you achieve goals and promote your wellbeing, but what about just a simple daydream? Did you know that even just allowing your mind to wander could be productive?

“Mummy, I can see the dream stars swirling above me,” said my five-year-old son as he lay back in bed with sleepy eyes.

“What are dream stars, sweetheart?” I asked.

“They’re magic stars that appear above your head when you go to sleep at night. They’re sent by wizards who get together in the day and decide what dreams you are going to have at night.”

My son’s imagination takes me by surprise sometimes. But it shouldn’t. Even he tells me children are much more creative than adults. “They let their minds run free more,” he says, and this is not just his opinion, it’s a fact he learned from his favourite kids’ show, Brainchild.

But will a creative imagination do him much good? One of my mother’s favourite phrases to describe me when I was young was, “You’re such a dreamer,” and this was not meant in the complimentary sense. Granted, letting one’s mind wander into various flights of fancy doesn’t seem terribly productive. And these days, with the trend of mindfulness and staying fully focused in the present moment, one can only assume that allowing one’s imagination to run free is a complete waste of time.

Someone who disagreed with this was the most influential physicist of the 20thcentury, Albert Einstein. Einstein made many references to how much he believed in the importance and extraordinary value of the imagination. In fact, it was his powerful imagination that enabled him to understand and arrive at some of his most revolutionary ideas. He did this in what he referred to as his “thought experiments”. At approximately age 16, Einstein hated his school in Germany as it emphasised rote learning rather than imagination. He ran away to a Swiss village school that was based on the educational philosophy of Johann Heinrich Pestalozzi, which focused on encouraging students to visualise concepts. While here, Einstein imagined chasing a beam of light. This later helped him arrive at his discovery of relativity. Later on, he imagined riding a free-falling elevator and this led him to understand that gravity and acceleration were the same.

Some of Einstein’s more famous quotes include, “Imagination is more important than knowledge,” “Logic will get you from A to B. Imagination will take you everywhere” and “Imagination is everything. It is the preview of life’s coming attractions.” It was his ability to let his mind wander and vividly picture his ideas that enabled him to find solutions to some of the universe’s incredibly complex mysteries.

It was [Einstein’s] ability to let his mind wander and vividly picture his ideas that enabled him to find solutions to some of the universe’s incredibly complex mysteries.

Research from the University of British Columbia supports Einstein’s approach to solving complex problems. It turns out wallowing in a lazy daydream isn’t lazy at all. MRI scans of the brain reveal that when people daydream, the brain actually becomes more active, and brain areas related to complex problem solving – which were once thought to switch off – are highly active during the daydreaming period. A 2012 study published in Psychological Science also suggests our working memory becomes more active when we daydream. Working memory is our ability to retain and remember information when we become distracted. This is better in people who daydream a lot. In the study, participants who daydreamed more often were better at remembering a series of letters when distracted by a maths problem, than those who were less prone to daydreaming.

But how can this be? After all, aren’t daydreamers meant to be more unfocused? The researchers hypothesised that the reason the daydreamers’ minds wander is because they have too much working memory capacity to focus on just the task at hand, so they let their minds wander with the extra capacity. If this is true, then it’s no surprise Einstein had an extraordinary imagination.

It’s perhaps also not surprising then that the imagination can be helpful when learning a new skill. A fine example comes from Russian human rights activist, Natan Sharansky, who used his imagination to improve his chess skills with phenomenal results. In 1977, Sharansky was sentenced to nine years in a Siberian prison on fabricated charges of spying for Amercians. He spent more than 400 days in a freezing punishment cell with barely any clothes or food, no bed or chair, and no one to talk to. He was also forbidden to read or write. Sharansky said he survived by playing chess games in his head and having to move for both sides of the chessboard. He said he played thousands of games in his mind and “won them all”. Granted, this is a bit different to just letting his mind wander and daydream, but it does show the impressive power of imagination. Sharansky had been a champion chess player in his hometown at just age 14. By using his imagination in this way he not only survived his prison ordeal, he thrived. He said “the KGB hoped that I would feel weaker and weaker mentally. Actually I felt stronger and stronger.” Sharansky learned how to play chess so well with just his imagination that after his release in 1986, he went on to beat world champion chess player Garry Kasparov 10 years later.

When we let our minds wander, it’s not just wasting time, but sorting things out.

Interestingly, research suggests that in situations of enforced boredom, perhaps not as extreme as Sharansky’s situation but during daily mundane activities when we are most likely to let our minds wander and daydream, is when we can be at our most creative. Research led by Benjamin Baird and Jonathan Schooler of the University of California had 135 students come up with as many uses as possible for a specific item like a brick or toothpick in one of four conditions. The students assigned to the condition of doing a boring task thought to elicit daydreaming did far better than students in other conditions, coming up with 41 per cent more possibilities. So if you can’t find a solution to a problem, take a break, go for a walk, or engage in something completely different and preferably mundane that allows your mind to wander for a while, such as sweeping the floor or dusting a room. Many people believe that when we let our minds wander, it’s not just wasting time, but sorting things out. And the above-mentioned research seems to support this idea.

Therapies that draw on the imagination

Given its benefits, it’s no surprise that psychotherapy draws on the benefits of the imagination.

Hypnosis works through suggestion and some kinds of hypnotherapy use suggestion to engage sight, sound, smell and touch to transport you to another place or time, which helps you relax and promotes wellbeing. The more you are able to engage your senses with your imagination, the more you can use them to attain a hypnotic trance. It might surprise you to know many people can’t do this. Some people may be able to see things in their mind but can’t imagine hearing or smelling them, and occasionally a person won’t be able to imagine things with any of their senses. When you can engage your sensory imagination, the therapist can give a suggestion that will promote healing, such as a beam of light washing through your body and cleansing it of negative emotions, or the warmth of the sun relaxing your muscles more and more with every breath you let go of, or the sound of a powerful crashing oceanic wave stimulating a sense of power and motivation. Combining powerful imagery with hypnotic suggestions in this way can promote deep healing and positive change.

If you have a fear you wish to overcome, imaginal rehearsal involves asking someone to imagine the feared situation in step-by-step detail while they are simultaneously encouraged to relax and cope with the feared situation. If you have an intense fear of flying in a plane, or meeting someone new on a date, you would be asked to imagine how you might prepare yourself and relax before the situation, and how you would cope if a challenge arose such as experiencing turbulence on the plane or having your mind go blank on a date. A similar approach is used with athletes who face a challenge when they compete. The athlete would be asked to imagine in detail preparing well for their event, and then performing their sport at peak performance as well as how it feels to do this.

This therapy assumes the client already has all the answers to their problems – they just haven’t been asking the right questions. When we have a problem we often focus on the problem too much and start to worry about it over and over. We might talk to a friend or therapist about “the problem”, and sometimes our worry gets so bad that we end up with anxiety or even depression, and then we attain a diagnosis and talk more about “the problem” to a therapist. Solution-focused therapists believe this typical pattern ends up making us and our view of the world “problem-saturated”. That is, the more we focus on the problem, the harder it is to see or imagine the solution. To create a solution-saturated world, solution-focused therapists believe we need to ask new solution-focused questions that engage our imagination. One of the classic questions in SFT is the miracle question, which goes something like this:

Imagine you went to bed tonight and someone waved a magic wand over your head so that the problem you seek help for suddenly vanished! The external problem may still exist – for example, your boss is impossible to work with, but suddenly you are able to cope with it well enough that you no longer need to seek help.

By engaging your imagination to answer these questions, you develop a solution-saturated world. And if here you can generate answers, they are gold as they can hold the key to the start of your recovery.

Similar SFT questions include: When you are coping a little better, what would you be thinking and doing differently? When the problem is not as bad, what are you doing differently? It can be surprising how by engaging our imagination in this way, we can sometimes generate answers to our problems that were inside us all along.

Activating your imagination and allowing your mind to wander isn’t such a time-wasting, lazy and pointless activity after all. And the term “dreamer” is certainly not one to be used in a derogatory fashion. In fact, when I next see my son with that dreamy, vacant expression on his face and he begins sprouting bizarre ideas, I’ll know he’s putting his brain to good use. I might just say in a tone full of approval, “Wow, Jordi, you’re such a dreamer. Well done!”

Questions to stimulate your imagination