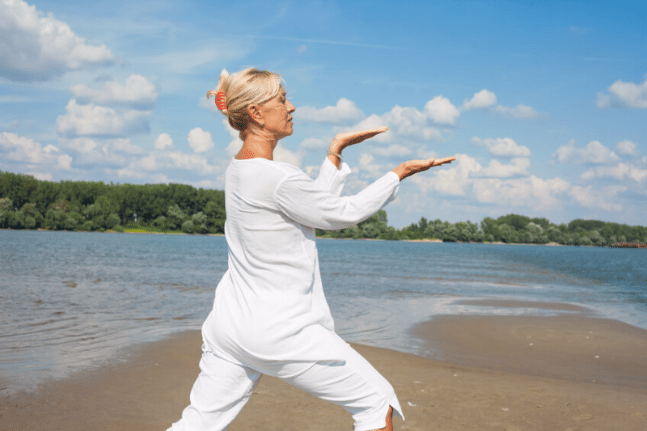 Tai Chi is a form of martial arts that has become popular in the West in recent decades, especially among older people. It may be that the gentle controlled moves suit an ageing body but the evidence is that Tai Chi also helps with the problems that occur as we age.

Taijiquan is the original Chinese word for this form of martial art and the word is anglicised to Tai Chi Chuan and Tai Chi in the west. The name comes from Tai meaning “supreme”, ji meaning “ultimate”, and quan or chuan meaning “fist”. “Supreme ultimate fist” may not appear to match the tranquil movements of modern Tai Chi but it has a power that warrants the name. The main aim of Tai Chi is to promote the smooth flow of your energy, your chi, inside the body and to maintain the balance if yin and yang in the body to keep you healthy. It is exercise for the harmony of mind and body and is a multidimensional activity. No wonder then that a new study has shown that it can help people with a range of major diseases.

Tai Chi is exercise for the harmony of mind and body and is a multidimensional activity. No wonder then that a new study has shown that it can help people with a range of major diseases.

The new study involved researchers searching for all available studies on Tai Chi up to 2014. They found 1102 studies but only found 21 of them to be of high enough quality to be used in their analysis. They then analysed the studies to see if Tai Chi improved sympt0ms and quality of life in people with cancer, osteoarthritis, heart failure, and chronic obstructive pulmonary disease (COPD).

The average age of subjects in the studies ranged from mid 50s to early 70s and the average length of the Tai Chi training program in the studies was 12 weeks consisting of 2-3 sessions per week, each of one hour.

Tai Chi was associated with definite improvements in physical capacity and muscle strength in most of the Health conditions. The improvements included enhanced results in the six minute walking test, muscle strength as measured by bending the knee, time it takes to get up from sitting, and general quality of life tests. Specifically Tai Chi was associated with improved pain and stiffness symptoms in osteoarthritis, reduced breathless in COPD, and improved sit to stand times in osteoarthritis.

The great thing was that Tai Chi showed no worsening of other symptoms, making the “supreme ultimate fist” well worth a try.