Are you a television addict? 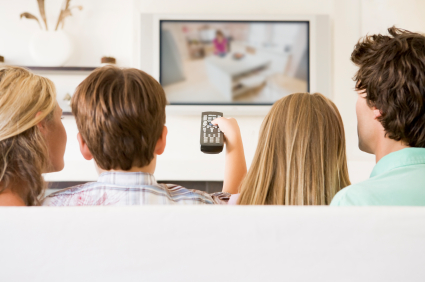 Is television your friend, entertainer, educator or sedator? TV’s seductive glow lures the average Australian to spend up to 10 years of their 70-year life hypnotised by its flickering pixels. But TV’s link to obesity, depression, anxiety, violence and learning disorders has many turning off the tube and switching onto life.

“Television! Teacher, mother, secret lover,” declared Homer Simpson in a sentiment shared by ardent TV addicts. Most agree this guilty pleasure is unproductive but can’t resist its instant gratification. And why not — it takes our mind off worries, quashes boredom and has been shown to reduce pain. But at what cost?

Our love/hate relationship with television is reflected in a TV network’s recent promo: “I think I love you, but what am I so afraid of?” There’s plenty to be afraid of, according to anti-television activists. Writer Julie Ryan explains why she booted the idiot box: “I don’t want my kids fed a steady diet of materialism, violence, infidelity and dishonesty.”

Though many concur, the screen siren’s call is proving irresistible. The average Western household has at least two TVs and sales of plasma screens and other home theatre equipment are skyrocketing. Television is a shameless pusher of its billion-dollar industry, reliant on hooking as many users as possible, irrespective of the responsibility or otherwise of content.

Television is powered by profit and profile, which rise with the ratings. Flashy promos, cliff-hanging dramas, unlimited cable channels and “exclusives” keep many glued like zombies. Add the rapid intercutting with zooms, pans, edits and the viewer’s attention is lulled into the alpha brainwave state necessary for brainwashing.

TV is fine in small doses, but many are becoming dependent on this accessible and affordable escape from reality. Anti-television campaigners liken it to the morphine of the masses, dulling people’s imagination, intelligence, creativity and social ties.

TV viewing remains the most time-consuming pastime in developed countries. On average, individuals in the industrialised world devote three hours a day to the pursuit. That’s half their leisure time and more hours than any other activity except work and sleep. In the UK, TV tops the list of leisure activities and in the US the average person watches 4-7 hours a day.

TV is sucking in babies as soon as they’re born, a recent Australian study showing that an average four-month-old watches TV for 44 minutes per day. An immature market is being nursed by America’s new 24-hour channel BabyFirstTV. The average four-year-old watches 2.5 hours a day and older children end up watching TV more hours than they spend at school.

However, according to American research, the most dedicated audience is the over-60s, whose physical and mental restrictions leave them fewer options. But why do young, vital people get hooked and how does all those years immersed in TV’s alternative reality affect the mind, body, behaviour and society?

“You’re beginning to believe the illusions we’re spinning here. You even think like the tube. This is mass madness — you maniacs! In God’s name, you people are the real thing. WE are the illusion.” — Howard Beale, played by Peter Finch in the film Network.

Messages from television seep into our subconscious and, though adults can process them with discrimination, children don’t have such filters, absorbing it as reality. Television’s distorted window to the world then greatly affects one’s perception of others and ourselves.